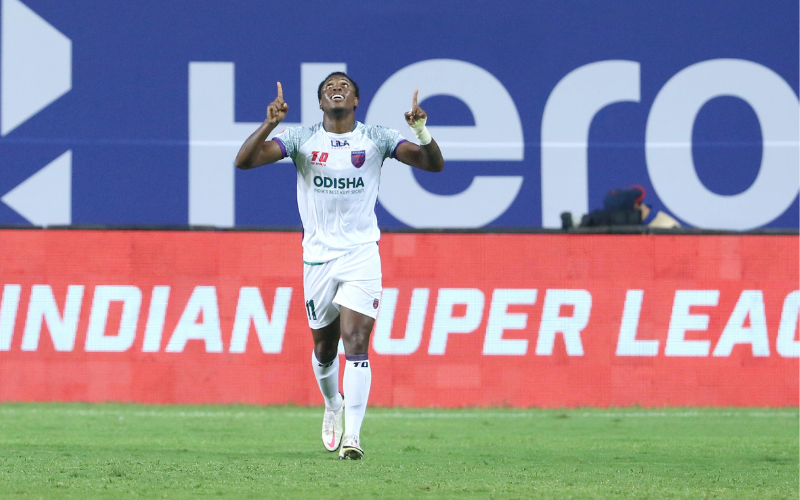 Nerijus Valskis Brace In Vain As Odisha FC Hit Back

As the cliche goes, it was a game of two halves. In the first, Jamshedpur FC looked unstoppable. In the second, it was Odisha FC United who asserted their dominance.

Jamshedpur FC's Hero Indian Super League game against Odisha FC was a game of two halves and two strikers. At the Tilak Maidan on Sunday, Jamshedpur's Nerijus Valskis dominated the first scoring twice (12', 27') and putting his team in a commanding position. Odisha's Diego Mauricio though grabbed headlines in the second, pulling one back in the 77th minute before driving home a stunning injury-time equaliser, to wrap up a thrilling 2-2 draw.

It did not take long for Owen Coyle's men to break the deadlock. Barely ten minutes in, Odisha goalkeeper Kamaljit Singh failed to deal with a cross and a goalmouth scramble ensued. It ended with Valskis turning and shooting at goal from close range, only for it to strike Odisha defender Gaurav Bora's hand. Referee Pratik Mondal promptly pointed to the spot and Valskis powered in the resulting penalty.

The game cooled down after the goal with both teams struggling to create chances. But it was Valskis again who shook it out of its stupor. And yet again, it was an Odisha defensive mistake that led to it.

Around the half-hour mark, defender Shubham Sarangi leapt to clear a cross, but only succeeded in diverting it into Valskis' path. The Lithuanian still had it all to do — he was at a difficult angle to goal and had only a narrow path to it between the goalkeeper and the post. But he still managed to squeeze it in with a powerful drive.

Odisha did fashion the occasional attack with Marcelinho, in particular, remaining a threatening presence throughout the first half. But they struggled to create clear-cut chances.

Odisha came alive in the second half with striker Manuel Onwu going close on a couple of occasions. In the 53rd minute, the Spaniard cut into the box before taking a shot. His effort though went wide. Then in the 60th, his acrobatic shot was well-saved by Jamshedpur keeper TP Rehenesh. The latter had more work to do from the resulting corner, palming a close-range shot over the bar.

There was more drama as Rehenesh got sent off in the 74th minute for handling the ball outside the penalty area. Substitute Mauricio struck the resulting freekick against the post, but the ball soon found its way back to him and he was able to bundle it in.

With ten-men Jamshedpur defending doggedly, it appeared as if Odisha were running out of time. However, Mauricio had other ideas. In stoppage time, the Brazilian unleashed a powerful shot from just inside the box that no goalkeeper would have saved.