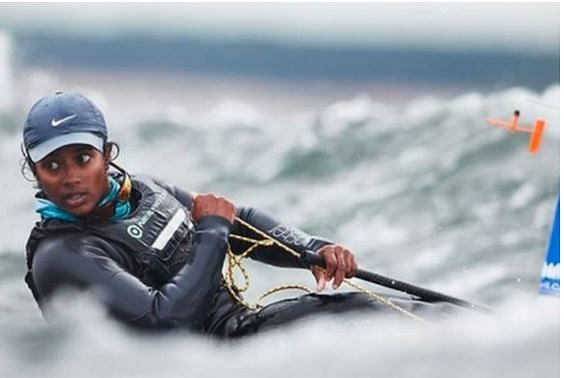 Nethra Kumanan became the first Indian woman sailor to qualify for the Olympics after she was assured of a top-place finish in the laser radial event of the Asian Qualifiers in Oman.

The 23-year-old Kumanan has a 21-point advantage over her nearest rival, who also happens to be an Indian, Ramya Saravanan, in the Laser Radial Class event with one race to go on Thursday.

The Chennai-based Kumanan currently has 18 points while Saravanan has 39 on the penultimate day of competitions in Mussanah Open Championship, which is a joint Asian and African Olympic qualifying event.

In sailing, the athlete who has the least points wins the competition.

The final race on Thursday is a 20 pointer and Kumanan has already sealed it with one round to go. Laser Radial is a singlehanded boat, which means that it is sailed by only one person.

“Yes, Kumanan has qualified for the Tokyo Olympics with one race to go on the final day on Thursday,” Asian Sailing Federation President Malav Shroff said.

“The final race is a 20 pointer but the point gap with her nearest Asian rival, also an Indian, is more than 20,” said Shroff who himself represented India in Olympic sailing event in the 2004 Athens Games.

Dutchwoman Emma Charlotte Jeanne Savelon are currently in second spot, above Saravanan, with just a three-point difference with Kumanan but she is nowhere in the scene for Olympics qualification from this event as this is an Asian Qualifier.

“Nethra qualified for the Olympics today, with a big lead in points; however the event is going to finish officially tomorrow, after the last race called Medal Race,” her Hungarian coach Tamas Eszes said.