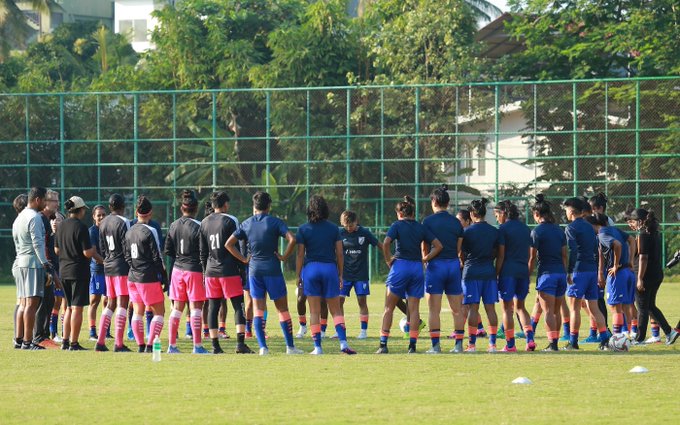 The New Year, 2022 is finally here, and the AFC Women’s Asian Cup is just around the corner. With a little over two weeks to go for the continental extravaganza to kick off, the Indian Women’s Team barely spared aby time for the New Year celebrations, as the regular training continued for the Blue Tigresses.

A brief traditional dress ceremony was sandwiched between two training sessions to help keep the spirits soaring high in the Blue Tigresses’ camp, as the preparations for the AFC Women’s Asian Cup went on.

“We do need to take some time and enjoy the regular things in life, but with the Asian Cup this close, that can’t be for long,” said winger Dangmei Grace. “Everyone’s determined to do well in the Asian Cup, and whatever we do in our free time to rest our minds, the focus still remains on the New Year.”

At the Blue Tigresses camp, one can see an array of determined faces, be it on the training ground, at the gyms, or during the video analysis sessions with the entire team. The overall feeling is that the entire squad is looking to take women’s football forward together in 2022.

A festive sneak peak before the New Year when the cast will arrive in 🇮🇳 in full glory! 🏆

Defender Ritu Rani says, “It’s not just this team and each other that we are fighting for. We are fighting for a better future for women’s football. We have been taking a lot of steps in the right direction in the past few years, but the Asian Cup is one tournament where we could make giant strides if we play to our true potential.”

India, being the hosts of the AFC Women’s Asian Cup India 2022, have been placed in Group A, where they will face off against IR Iran (January 20), Chinese Taipei (January 23), and China (January 26). With 12 teams participating in the Group Stage, eight of them will progress through to the quarterfinals, and depending on other results, could take closer steps towards qualifying for the FIFA women’s World Cup, Australia 2023.

“Who doesn’t dream of playing a World Cup? Every footballer in our country would have dreamed of it,” Ritu opined. “The U-17 boys back in 2017 had that privilege, and a couple of U-16 batches had also come close to qualifying, but the general feeling amongst us all is that we have a good chance of putting ourselves within touching distance of that.”