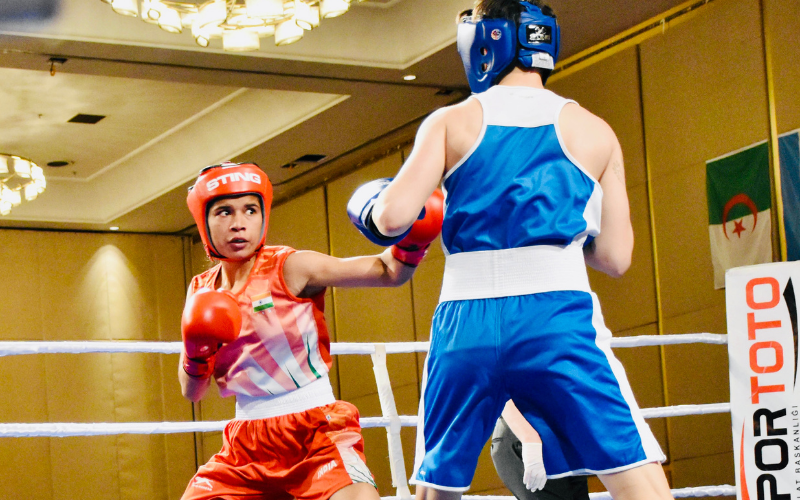 Nikhat, who had earlier defeated 2019 World Champion Paltceva Ekaterina of Russia in the pre quarter-final, looked unfazed and confident against her opponent from Kazakhstan. She stamped her authority right from the beginning and prevailed in a 4-1 win over Kyzaibay, a gold medallist from 2014 and 2016 World Championships, and ensured at least a bronze medal with a place in last-4.

Apart from Zareen, the 2018 CWG Gold medallist Gaurav Solanki (57kg) also sailed into the semi-finals after a tough contest against local boy Aykol Mizan. Both the boxers attacked throughout the bout but Solanki showed his technical supremacy to secure a 4-1 win and assured himself of at least a bronze medal.

Among other women boxers, Sonia Lather (57kg), Parveen (60kg) and Jyoti (69kg) made exits with losses in their respective quarter-finals. Meanwhile, Shiva Thapa (63kg) lost 4-1 to Turkey's Hakan Dogan in an intense bout.

The fourth day of the tournament will see two Indian boxers fighting in their respective semi-final bouts later today. Zareen will face another tough challenge as she takes on 2019 World Championships silver-medallist Busenaz Cakiroglu of Turkey while Solanki will be up against Argentina's Nirco Cuello.

Away from home, Indian boxing team celebrates Diwali in Italy