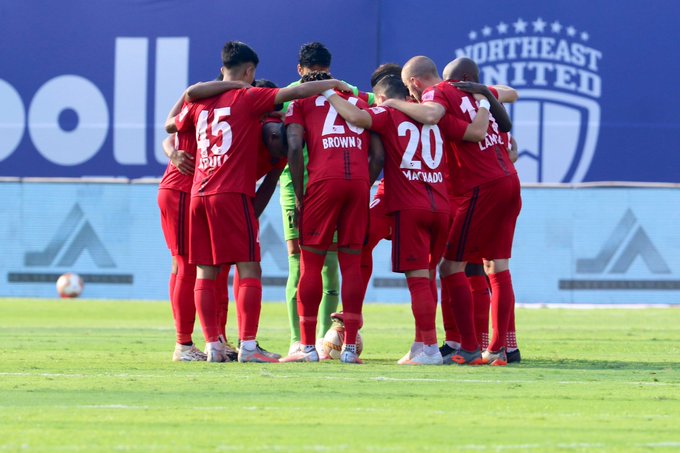 NorthEast United FC are unbeaten in their last eight Hero Indian Super League games. Ever since Khalid Jamil took charge, the Highlanders have grown in confidence and have produced stunning results from some difficult games.

Under Jamil, the Highlanders have taken 18 points. Only ATK Mohun Bagan (20) have more points and they have played an extra game.

Even a draw is enough for the Guwahati-based side against Kerala Blasters on Friday at the Tilak Maidan Stadium in Vasco to seal their place in the top four, ensuring their second-ever appearance in the knockout phase.

Kerala have been on a barren run and lie second from last, but Jamil urged his side not to take their opponents lightly. "They (Kerala Blasters) are a good team. They have talented players and so we will have to prepare. It will be a difficult game. We shouldn't take this match lightly. We must fight," he said.

NEUFC might need just a point but Jamil was in no mood to settle for a draw. He stated that there wouldn't be any change in their preparation. "We are not thinking about anything else. The preparations are the same. There are no changes in anything. The idea is to go there and give your best and have to be ready in all aspects," he said.

Jamil has enjoyed success earlier. However, a win or a draw against KBFC will not only stretch his unbeaten run to nine games, but will also make him the first Indian manager to have managed more than three league matches and qualified for the playoffs. Jamil rated his NEUFC assignment as the toughest to date. "It's a big challenge here in ISL. Here we are dealing with good teams in the Hero ISL. There are quality players and coaches. So this is a different challenge," he said.

Kerala are without a win in their last seven league games. With nothing but just pride to play for, interim coach Ishfaq Ahmed will be looking to end the season on a high.

However, KBFC have failed to record a single win against their opponents in the last five meetings. NEUFC won once and the remaining matches were drawn.