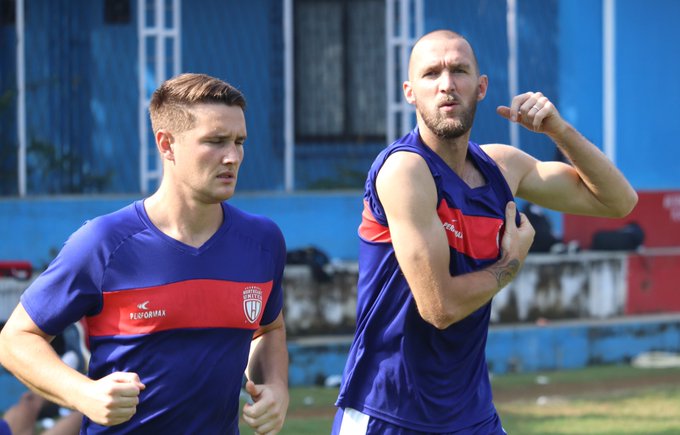 For NorthEast United, life in the Hero Indian Super League without Gerard Nus has been off to a rather positive start.

Snapping a winless run against Jamshedpur FC propelled them all the way to fifth on the table. Now they face a much tougher test of their credentials when they take on ATK Mohun Bagan at the Fatorda Stadium, here on Tuesday.

With teams entering the final third of the season, NEUFC can afford no more slip-ups if they are to enter the playoffs. Fortunately, as they line up against a team that has been stingy at the back all season, they have found an unexpected source of goals. Against Jamshedpur on Sunday, the winner was scored by Deshorn Brown, who arrived from Bengaluru FC recently. The Jamaican, who had failed to impress at BFC, seems to have hit the ground running at NEUFC.

"It's a different style to what Bengaluru play," Brown explained, ahead of the clash with ATKMB. "I think we will get more scoring opportunities here. I like the style and it will do better for me in the long run as well. The difference is that these guys, they tried to penetrate down the middle as compared to Bengaluru. At Bengaluru, they try to go out wide and play crosses, but the delivery of the crosses is not great which makes it really difficult for the strikers to score."

Brown's promising debut along with a potential return to form for Federico Gallego — who assisted both goals against Jamshedpur — augurs well for NEUFC. "We'll stick to the plan," said Brown. "They are a good team but any team can beat any team. We just have to get going from the beginning and things will happen."

For ATKMB, it's all about keeping in pursuit of Mumbai City FC in the hope that they will slip up. Antonio Lopez Habas' men left it late to win their previous encounter game against Chennaiyin FC and the Spanish coach understands that NEUFC will present a tough challenge as well. "I think the team played well for 90 minutes against Chennnaiyin," he said. The players understood that we needed to win the game. We changed the system of how we play and under this new system, it was possible to score more goals."

"We have to give respect to our opponents and we have to be at our best to win the match," Habas added. "They are a difficult opponent. They have good players and they will make it difficult for us."