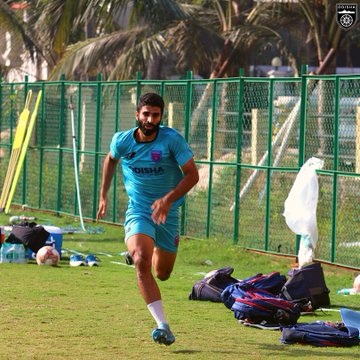 With the Hero Indian Super League season well into the business end, most teams are firming up plans to secure a top-four spot. However, for Odisha FC coach Stuart Baxter, this looks a distant dream. His side is rooted to the bottom of the table with just eight points, 13 behind the fourth-placed team. And as they prepare to take on Jamshedpur FC at the GMC Stadium in Bambolim on Monday, the path, rather than the destination, is what matters for Baxter.

"We are not talking about the play-offs till about two to three weeks. We're talking about getting to the next game. And hopefully, we will get a victory — that's what we have been trying to do since the season started," Baxter said.

The Kalinga Warriors have won just one game and have lost seven, managing just one clean sheet in this edition. But they did record two draws in the last two encounters against better teams. Baxter urged his side to step up and turn the things around. "At the moment, we need to start (turning) those good performances that ended in a draw to good performances that result in a win," he said.

The last time the two teams clashed, they split points in a four-goal thriller. Baxter anticipates another tough fixture on Monday. "Owen's (Coyle) team is usually very competitive. I've seen them play games where they don't give up and they've got some good players. So I don't expect anything less than a difficult game," Baxter continued.

Jamshedpur find themselves in a similar situation. While Odisha have dropped points in their last four games, it's been five matches since JFC registered a win. JFC have also failed to score in three out of their last four games. With the top four looking ever so distant, coach Owen Coyle will be looking to turn his team's goalscoring form around. "The way for us is to try and win those games which can make a difference, from one point to three points. We showed last year that if you can win game after game, then that carries (teams) into those positions (top four). We have six massive games ahead of us but we will take each game at a time starting with Odisha. We want to try and win that game," he said.

"Odisha have some very good players. When you look at the forward players, they are capable of scoring goals. It will be an exciting game as both teams would want to win," Coyle said.