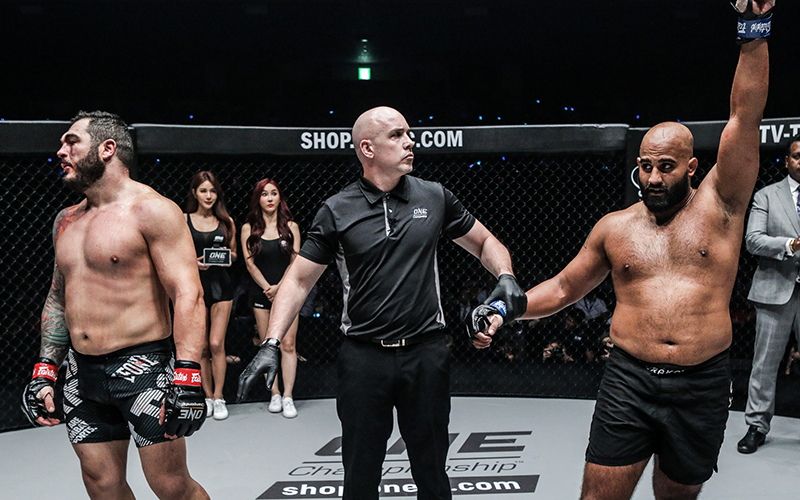 Bhullar expected to challenge ONE Heavyweight World Champion Brandon Vera in his next bout.

With his sights set firmly on becoming a World Champion since joining ONE Championship last year, heavyweight Arjan Singh Bhullar has returned to Punjab to rediscover his roots and empower and inspire people in his native village of Jalandhar.

As one of the top mixed martial artists in the world, Bhullar has always looked to use his career as a platform to inspire his people, transcending the boundaries of sports and looking to make a real change in society.

From winning a gold medal in wrestling in the 2010 Commonwealth Games to making a thunderous ONE debut, the 2016 Olympian is certainly an accomplished athlete and his position come with a lot of influence. But despite his success on the global stage, Bhullar’s profound love and respect for the country of his origin has remained intact.

One area of society Bhullar has focused to champion is the empowerment of Indian women, particularly in Jalandhar. Bhullar recently built a facility where village women can socialize. He provided sewing machines, cloth and various other materials for the purpose of producing face masks to help keep the village safe from the overreaching tentacles of COVID-19.

“I have been frequently visiting India since I was a child. I am still very attached to my village and the people there. We have built a very special place within the village for the women to gather, as they, unlike men, have nowhere to go and spend time,” said Bhullar.

“The women have a great time there and during the pandemic, they have been making masks with the sewing machines that I have procured for them. Today, these women are not only self-sufficient but are also helping and empowering the entire village and the neighbouring region.”

Bhullar also put up a local gym to help groom the next generation of Indian mixed martial arts stars.

The colossal heavyweight is on a personal mission to turn India into a martial arts powerhouse by taking troubled youth off the streets, many of whom have fallen prey to the traps and vices of poverty and hardship, and change their lives through sports. These efforts have built many futures and have energized Jalandhar.

“We built a gym shortly after the 2010 Commonwealth Games for the youngsters” said Bhullar.

“It’s connected to the local school and kids come to practice sports from the adjoining villages too. The kids have all taken on sports in a professional way and it keeps them focused. I want to make my village a model village and spread the message that anything is possible all over India when the intent is right.”

While Bhullar is dedicated to helping his people, especially in these times of need, he has not lost sight of advancing his professional career. Bhullar is laser-focused on making a run at the ONE Heavyweight World Championship, currently held by Filipino-American superstar Brandon Vera.

Bhullar made his ONE Championship debut last October in Tokyo, Japan, defeating top contender Mauro Cerilli via dominant unanimous decision. The incredible performance over a former world title challenger catapulted Bhullar up the divisional ladder, and he’s now next in line for a shot at the gold.

Although details of the bout are yet to be revealed, Bhullar and Vera are expected to meet inside the Circle when the current situation eases and events resume. The thought of becoming a ONE World Champion and representing India is one that drives Bhullar to push himself hard each day in training.