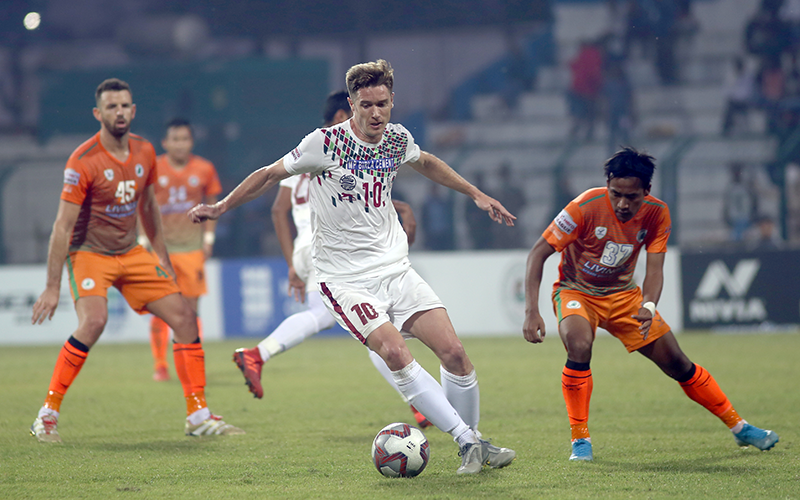 Mohun Bagan may be sitting pretty 11 points clear at the top of the Hero I-League table, but Joseba Beitia, fondly referred to as the 'Midfield Magician' by the Mariners, expressed "the job is far from being done.”

"We know that we are going fast. We have seven matches still left and we have a task,” Beitia stated to www.i-league.org in an exclusive chat.

“I won’t deny we are in a favourable position. But we need to continue what we have done until now. We want to win all our remaining matches, no matter how many points we are leading by at this point," Beitia stressed. “The job is far from being done.”

Since going down to Churchill Brothers FC Goa on December 8 last year, the Green and Maroons have gone on to bag 31 points from possible 33 as they lead second-placed Punjab FC by 11 points. at the top of the Hero I-League table.

Their scintillating run in the ongoing Hero I-League season includes 6 consecutive wins but the Spaniard showed immense respect for other teams while labelling the league as "unpredictable and very difficult."

"The Hero I-League is unpredictable and very difficult. It puts you in front of a new challenge every day. Every team is capable of beating others. We might have won ten matches but no one shouldn't tag us as favourites. We have to stay focused," the 29-year-old former Real Sociedad II midfielder mentioned.

"It's not about any individual, I always believe in totality. It's team Mohun Bagan who have garnered the results until now. The Indian talents have done tremendously well and they can surely achieve more should they continue the good work they have done till now."

"We share a good bond between us and talk a lot. We discuss football, personal stuff and a lot," he revealed.

Similar to his best friend Illarramandi, Beitia has also been the go-to man in the midfield. Till now, he has provided eight assists out of Mohun Bagan's tally of 30. Besides orchestrating attacking moves from midfield primarily, he has had 53% successful passes (99/188) into the penalty box also while Real Kashmir FC’s Kallum Higginbotham, who lies second in the list, has 68 successful ones out of 133 attempts.

"My job is to contribute to the team's cause. To me playing good football and getting a win is of paramount importance," Beitia explained. "Probably I've had 20 assists in the season which means we were able to score from those 20 chances. That to me is more important. If our opponents outscore us and we end up losing, you won't remember my assists or anyone else's goals,” he smiled.