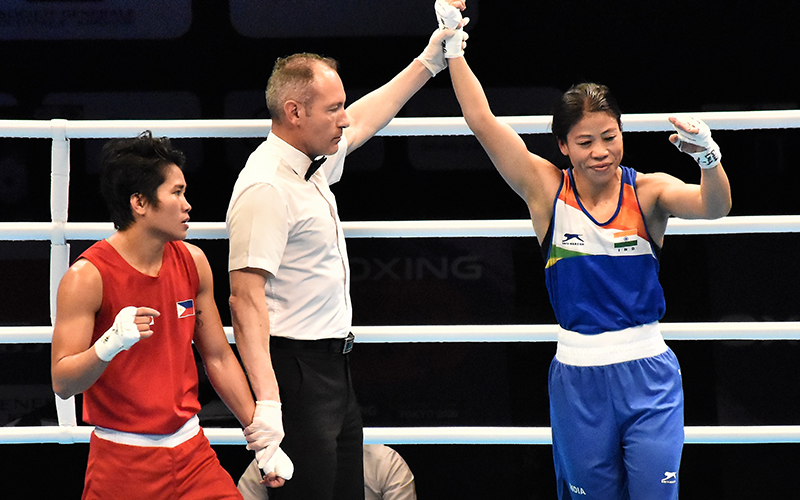 London Olympic bronze medallist Mary Kom (51kg) secured her second appearance at the mega quadrennial Games with a flawless 5-0 win over Irish Magno of Philippines as she entered the semi-finals of the Asian/Oceanian Olympic Qualifiers in Amman, Jordan today. With Mary’s win, India now has seven quotas for the Tokyo 2020 Games.

Riding on her barrage of left cross and clear punches, the six-time world champion established her supremacy early on in the bout and refused to relent as the match progressed. She will now take on reigning Asian Games gold medallist Yuan Chang of China in her quest for a spot in the final of this event.

Earlier in the day, World Championships silver medallist Amit Panghal (52kg) defeated Carlo Paalam of Philippines 4-1 to secure the sixth quota for India at the 2020 Tokyo Olympics by entering the semi-finals.

World Championships bronze medallist Manish Kaushik (63kg), meanwhile, went down 2-3 to third seed and Asian Games silver medallist Chinzorig Baatarsukh of Mongolia in a hard-fought quarter-final. Kaushik can still fulfil his Olympic dream as with 6 boxers qualifying from 63kg, he will get once more chance with a box-off opportunity, where the losing quarterfinalist players will have yet another shot.

In his quest, Manish will face Harrison Garside of Australia in the box-off bout on 11th and a win there will secure his Olympic quota.

It was however, the end of the road in the Asian Qualifiers for former world youth champion Sakshi Chaudhary (57kg) who was blanked 0-5 by Korea's Im Aeji in the quarter-finals.

Panghal, who was the lone bright spot for the Indian contingent in the first session today, had earlier beaten his opponent in the semi-finals of the 2018 Asian Games and the quarter-finals of the 2019 World Championships as well. The familiarity helped him stave off a late resistance from the Southeast Asian Games gold medallist and book his Olympic berth for the very first time.

“I had played my opponent twice and had beaten him as well. I came with a lot of confidence to get the win this time too. I executed whatever strategy my coaches had chalked out. I am glad that gave me the win as well as the Olympic quota. In the next round, I play a Chinese boxer whom I have beaten before at the Asian Championships. The aim is to repeat it and move into the final,” said the Asian Games champion after his win.

He will next take on China’s Hu Jianguan, a bronze medallist at the Rio Olympics as well as the 2019 Asian Championships.

With 8 already qualified, and still two boxers on the fray, can India better its previous record of 8?