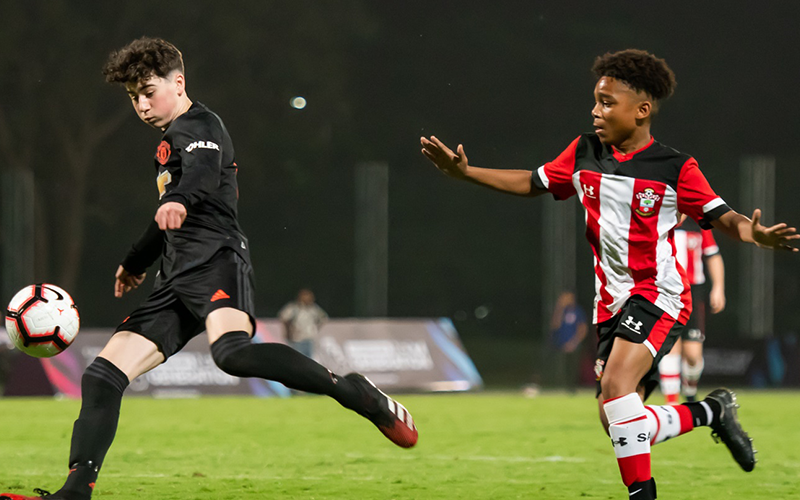 The boys from Manchester United prevailed against Southampton Under-14s with a 3-1 win in the final game of day three in the PL-ISL Next Generation Mumbai Cup 2020 at the Reliance Corporate Park Football Ground, Navi Mumbai.

Despite the ‘Young Saints’ put in an arguably improved performance learning from their previous mistakes, the United youngsters relatively had it easy. Southampton winger Ryan Chavez-Munoz was industrious throughout the first half, as he chased his opponents to win back the possession and also carved in some good balls into the box.

However, United’s right-back James Nolan whipped in a cross which Ethan Wheatley converted for the opener in added time of the first half. Southampton could have levelled after the restart, but Adetokunbo’s strike was conveniently saved by the opposition’s shot-stopper. Just a few minutes later though, Alfie Prescott curled in a clear shot from the edge of the box to bring Southampton back into the game.

It took merely a few minutes for them to restore their lead through a goal by Ethan Williams in the 38th minute. Williams’ initial shot was saved by goalkeeper Bastian Smith. However, he showed a calm demeanor to get behind Bastian and then slot the ball in through the rebound. They were relentless from thereon, as Dylan Sime was fed a short pass by James Nolan inside the box which the former tapped into the net and further stretched his team’s command over this game.

Southampton tried hard to claw their way back but were unfortunate eventually and the final whistle ruled the game in the favor of Manchester United.