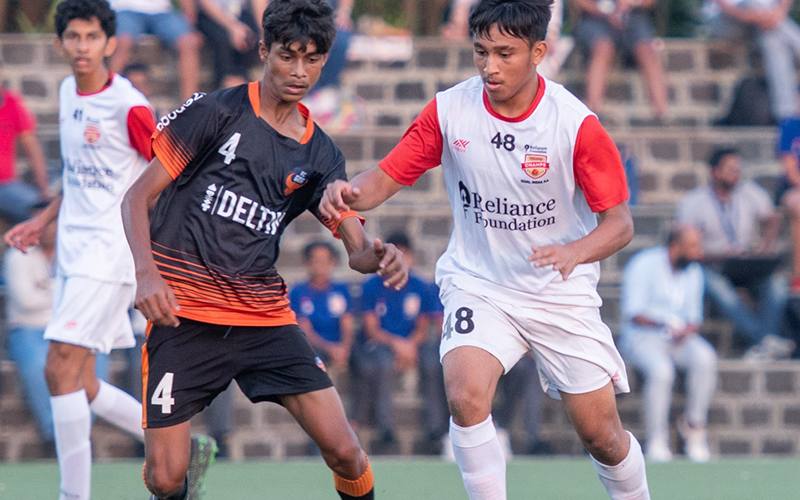 The boys from FC Goa made it two wins out of two on Day 2 of the PL-ISL Next Generation Cup Mumbai 2020 at the Reliance Corporate Park in Navi Mumbai. The young Gaurs held their nerves during a titanic encounter to finish the match 1-0 up against the Reliance Foundation Youth Champs.

RFYC began the encounter from where they left the previous game with an attacking mindset at the outset. Silajit Santra, who had scored in their opening two games, presented a constant threat down the flanks and he was ably supported by Yanglem Sanathomba.

However, as the match progressed, FC Goa found a foothold and started a robust counter attack. Salgeo Inacio Dias, in particular, had a couple of opportunities to take the lead but was denied by RFYC’s sturdy defence.

At the start of the second half, the Reliance Foundation Young Champs began in a similar vein to the opening period as they immediately swarmed the FC Goa box in their pursuit for the first goal of the match. However, Razibul Mistry saw his right-footed shot saved by Goa goalkeeper Micky Dias.

Throughout the contest, both sides displayed exemplary application and energy, across the pitch, with both teams fighting to maintain possession.

It was FC Goa who took first honour at the goal in the 39th minute as Merwin Domnic Fernandes showed the requisite awareness to bundle a loose ball over the line from close range.

However, that didn’t seem to faze RFYC as they kept pushing for an equalizer. In the 45th minute, Akshay Venkat found himself through on goal but he sliced his shot past the near post.

FC Goa, despite the incessant pressure from the Young Champs, held on towards the end to ensure that they capped off their day with another victory.