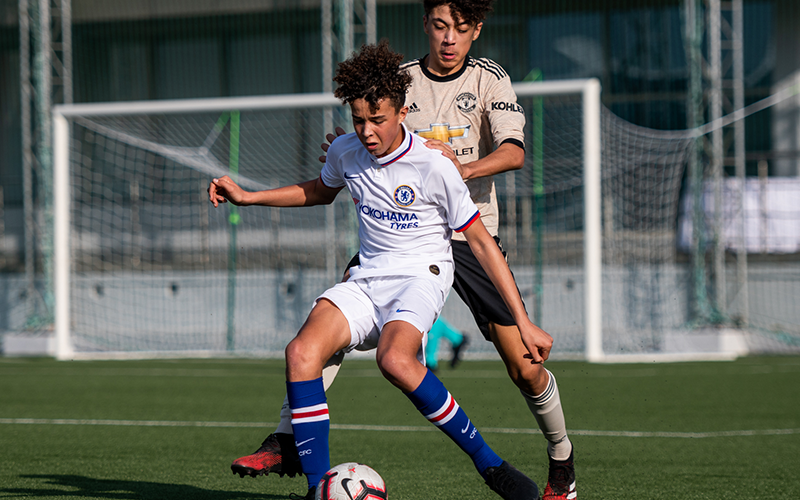 An English football classic kick-started the second day of the PL-ISL Next Generation Cup Mumbai 2020 with Chelsea FC squaring off against Manchester United FC at the Reliance Corporate Park Football Ground, Navi Mumbai here today. The Chelsea boys emerged 1-0 winners over their United counterparts, building on their win from the previous evening.

The game began at a frenetic pace as the Young Blues quickly established a foothold and started dominating possession. Reiss Alexander-Denny, in particular, was hugely influential as he kept things ticking in midfield and kept orchestrating Chelsea’s offensive moves.

In the 6th minute, the West Londoners surged ahead when Kamarni Ryan followed through on Chinonso Chizuebe’s shot which rebounded off the goalpost. Ryan made no mistake and slotted the ball home.

Manchester United U-14s responded well after conceding but failed to get the elusive equaliser before the half-time whistle.

However, the closest they came was when Ruben Curley clattered the crossbar off a direct free-kick from 25 yards in the dying embers of the first period.

In the second half, Ethan Wheatley helped United orchestrate a couple of attacks but the Chelsea defence remained resolute. Louis Jackson fouled Jack Phillips and was subsequently sent off for his challenge.

Despite being a man down, the Young Red Devils pressed on and went incredibly close in the 46th minute when Finley McAllister’s shot was palmed away by Max Merrick as Chelsea held on their second consecutive win of the tournament.