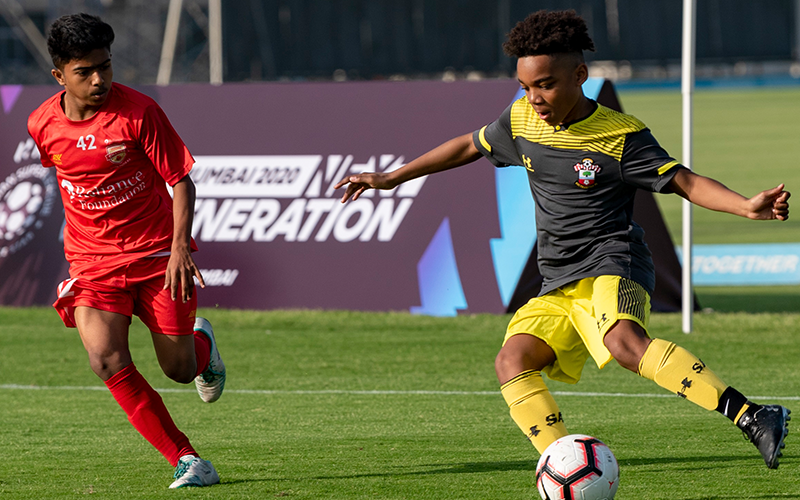 The Reliance Foundation Young Champs began the day bright an early with a 3-0 win over Southampton FC Under-14s in the PL-ISL Next Generation Mumbai Cup 2020 at the Reliance Corporate Park Football Ground, Navi Mumbai.

Remarkably, the Young Champs seemed to get in the groove from the get go against their English opponents. Their gameplay was incredibly fluid, coherent and the boys functioned like a well-organized unit on the field. The ‘Young Saints’ were up for a tough fight and had come increasingly close to scoring the opener.

However, it was midfielder Harsh Palande who handed the home side a lead in the 10th minute. Palande smartly made his way into the box, subtly collected the ball and slotted it into the net with his left foot.

The Young Champs arguably had an upper hand in proceedings and they looked to be more confident in their approach whenever they had hold of the ball after breaking the deadlock.

Palande could have doubled his tally in the 42nd minute but his shot was saved by Southampton’s goalkeeper, Bastian.

A couple of minutes later, another Harsh, this time the striker Vaghela, came off the bench to tap home from handshaking distance.

Silajit Santra, who had scored against Chelsea the other night, added another in injury time. Santra ran in through the flank to shoot the ball into the net, rounding off a commanding victory.