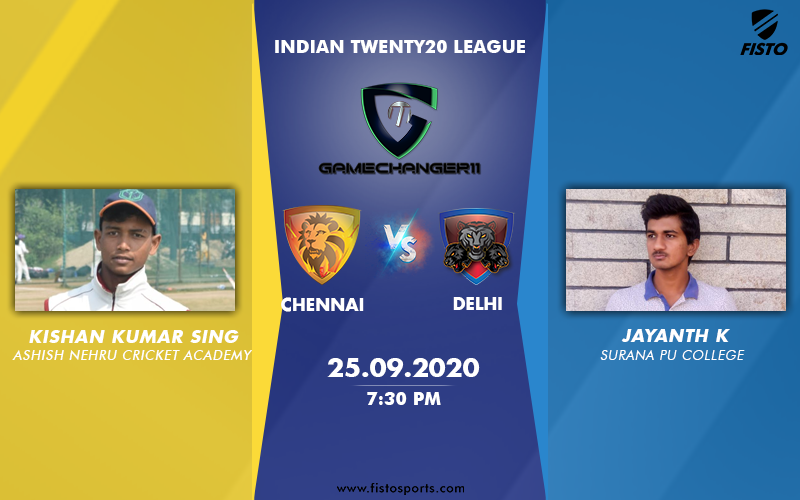 CSK look to get back on track against a confident Delhi Capitals at the Dubai International Stadium on Friday.

Chennai Super Kings suffered a massive defeat at the hands of Royals in Sharjah. Now they are all set to collide against Delhi Capitals tonight at their Match 3. Once again, all eyes will be set on Dhoni as his batting order is creating a bit of confusion among his fans.

CSK lost the match by just 16 runs despite chasing a huge total of 216 runs. It was a tight contest, but Dhoni’s couple of sixes early in the innings could have made a big difference.

Delhi Capitals are resilient and super confident after winning their nail-biting encounter against Kings XI Punjab. They made a confident entry into the IPL 2020 with a bang. At CSK vs DC match tonight, all eyes will be on Stoinis, Dhawan, and Shreyas Iyer.

For CSK, despite losing their last match, Faf du Plessis and Dhoni’s late onslaughts with towering sixes were the only silver lining for them. It showed that CSK’s batting is fully poised for a bigger battle if time comes.

CSK star Rayudu is yet to fully recover and will stay out of action tonight and a few matches more. Delhi’s injury update regarding R Ashwin also shows positive result, and he is expected to bowl at this match.

Ngidi’s last over proved too costly for CSK as RR hammered 30 runs in his last over with Jofra Archer hitting four towering sixes against the Protean. It will be interesting to see how MS Dhoni executes his death over strategy against Delhi Capitals.

In an exclusive chat with Kishan Kumar Singh who studies at Sangam Modern School, and also practices cricket at Ashish Nehra Cricket Academy, he analysed CSK’s strategy as follows.

Chennai Super Kings are still one of the most agile teams in the IPL 2020. Their bowling and batting can outwit any team any day. But they just need to stick to their game plan, and properly execute the same on the field.

CSK should not be too concerned about their last match as RR outplayed them completely – thanks to Sanju Samson and Smith’s heroic with the bat. But, one thing that CSK seriously needs to look into is its batting order. There shouldn’t be any confusion on that.

On the positive side, CSK’s Faf du Plessis, MS Dhoni, and Shane Watson are in sublime form. Just small-small droplets make rain; similarly, Dhoni will have to execute his game plan with smaller steps overcoming the previous slight errors.

Overall, it’s going to be a nail-biting contest between Delhi Capitals and CSK. All that Chennai are hoping now is big knocks from its top three. Also, the team expects Dhoni to come at number four.

When it comes to CSK’s bowling, their prime target will be to remove both Shikhar Dhawan and Delhi Capitals skipper Shreyas Iyer early in the match. Both of these batsmen are in tremendous form along with Marcus Stoinis at number five. Chennai would desperately looking for Marcus’s wicket or keeping him off strike as far as possible.

After Marcus Stoinis’s wonderful all-round performance in the last match, Delhi fans are eyeing heavily on him for this particular match against the Super Kings. In the last match, he not only hit a blinder of 21-ball 53 (4s x 7, 6s x 3), but also chipped in a couple of crucial wickets to keep Punjab’s any chance of a win at bay.

Kagiso Rabada’s fantastic form with the ball is good news for DC. He delivered a brilliant super over leaking just 3 runs while scalping two wickets. Eventually, this super over was the death knell for Punjab and, soon they accepted the defeat.

The DC had a lucky escape against KXIP in the super over in Dubai, but they are looking forward to giving a clinical performance this time against Chennai.

Delhi Capitals will rely heavily on Rabada as he’s in good form. If Delhi Capitals restrict CSK below 170, and dismiss Faf du Plessis early, then they could easily win the match.

When it comes to batting Delhi Capitals need good partnership and some good knocks form its middle orders who are well-known hitters too.

The big task before the Delhi Capitals will be to safely negotiate the first few overs from CSK’s Deepak Chahar, Ngidi, and Curran. Losing initial wickets against the mighty CSK could give the Dad’s army that little chance of taking the game away from Delhi.

Players to Watch Out For At CSK Vs DC Match

After Piyush Chawla’s 55 runs from 4 overs against Royals, he is likely to be dropped from the side. Imran Tahir, the South African magical spinner, is all ready to replace him for tonight’s clash. Imran Tahir has scalped 79 wickets from 55 IPL matches. He is all set to add more wickets to his kitty this season. Since this will be his first IPL outing this season, Tahir is set to create some magic in his four-over spell tonight.

Currently, Faf is the leading run-scorer of the tournament with 130 runs from two matches with two fifties at a staggering average of 130. He’s in tremendous form this season. He is one of those cricketers who knows how to rotate the strike in adverse situations, and quickly change gears when needed. In the last match, he hit 7 massive sixes and waged a solitary battle against the Rajasthan Royals. He’s just 17 runs shy of scoring his 2000 IPL runs. If he gets that, then Faf will play another big knock for his side.

R. Ashwin’s shoulder injury updates have confirmed that his pain has considerably subsidized. His latest scan report shows encouraging results, which makes his chance of playing against his previous home team, CSK, quite possible. Ashwin has 127 IPL wickets in his career, and he is all set to play against CSK provided any last-minute injury scare doesn’t keep him out of action at tonight’s clash. His carrom ball as a potential arm will be the key to restricting CSK’s mighty batsmen!

Rabada is just playing his third IPL season, but he had already proved his worth for the side since last IPL. He was retained by Delhi last year, and it paid off well as the Protean pace battery chipped in 25 wickets in 12 matches at IPL 13.

In the first match against Punjab too, his crucial super over cruised his side to a thumping win. If Kagiso removes CSK’s top order or even restrict their run-flow in the powerplay, then no doubt, his four-over spell could once again prove to be a match-decider. But, MS Dhoni won’t let that happen, just wait for this gigantic battle between CSK batsmen Vs Rabada!

Dad’s army will have an edge over the Capitals. Two of the most popular IPL teams representing India’s North and South have faced each other on 20 Occasions.

Chennai won 14 matches while Delhi prevailed over in the remaining 6 of them.

Pitch Report: It is definitely a bat first pitch. Chasing is not easy here and the 3 games that happened here this season suggests the same. The captains need to break the trend that has been formed in this IPL of batting second.

Shreyas Iyer looked in fine form in the first game. The DC Captain could be a real game changer for his side.

Marcus Stoinis scored a blistering 53 of 21 balls in the first game. He then came out and took two wickets with the ball in the final over to tie the match. He will surely give you points.

Faf du Plessis has scored two fifties in two games. He is in great form and is a must pick for your fantasy team. He can be a safe option for Captain.

Shane Watson looked in great touch against RR. He will be gutted to have missed out and will be eager to perform in this game.

MS Dhoni has still got those six-hitting abilities. If he comes in to bat higher, we might see a few helicopters flying around the ground.