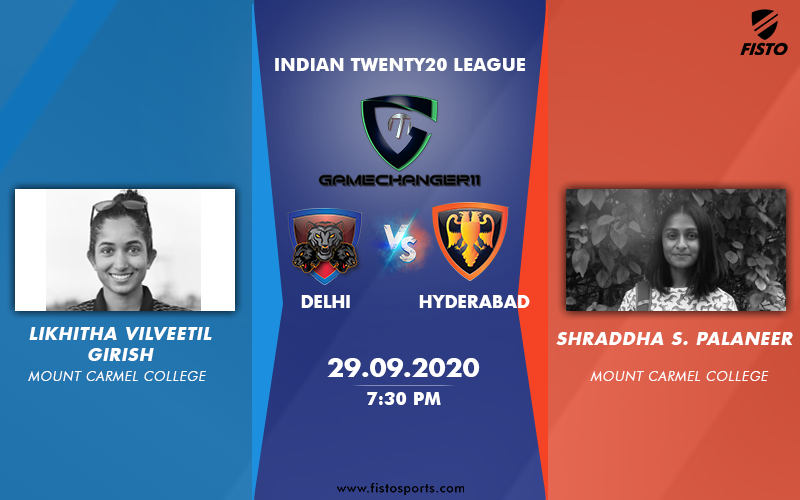 This Tuesday, Delhi Capitals and Sunrisers Hyderabad face off in a meeting of teams experiencing vastly divergent changes in form.

The teams are in the opposite sides of the points table with the Capitals leading the table and Sunrisers at the bottom. As a consequence, this Tuesday’s match provides both teams with different opportunities.

For Delhi Capitals (DC), following two successive victories, will look to continue their winning momentum going; for Sunrisers Hyderabad (SRH), a victory would only build up the momentum as they push to avoid the drop.

Will this be the game where the pieces finally fall into place, kickstarting a fight for survival in the process, or will the SRH fall flat once again?

Delhi Capitals are the early favourite in the IPL 2020 with two important wins in their first two matches. Their first win came in a super-over and their second win was a dominant display over a strong but aging CSK outfit. Their Indian led batting line up looks in form and all four of their top Indian batsmen looked in form and aware of their respective roles. Whereas Prithvi Shaw played his attacking opener role superbly against CSK to score 64 of 43 in a Man-of-the-match winning performance, Shikhar Dhawan played perfect foil with a sensible 35 off 27. Even in middle order, the captain Shreyas Iyer has identified himself for the anchor’s role and the expectation from Rishabh Pant is to play the more attacking brand of cricket. Even Marcus Stoinis played a brilliant innings in the first match and if Shimron Hetmyer can join the party they would look like owning the most stable top six in this year’s IPL.

Their bowling also looked in safe hand, led by Kagiso Rabada. Anrich Nortje presented a perfect support role for Rabada and developing another great bowling partnership. They missed Ashwin in their second match and Amit Mishra fill the void perfectly and went for just 23 runs in his four overs. Even Axar Patel bowled very tightly in both these matches. Overall, Capitals look like a very strong outfit who should become even more stronger with Ashwin’s return. Whether he is included in this match or rested for few more days, that would be interesting to see.

DC has started their IPL season with a bang! They have a solid batting line up, which has delivered in the previous two games. They have a good balance of Pace and spin bowling, so that is sorted.

David Warner is the biggest threat to DC as he has the capability of winning the game single handed, and SRH are in desperate need for a win considering their previous performances. Getting David Warner out early would be ideal for DC.

DC must keep going with the same momentum as they have been, as for the playing 11, I feel they must stick to the same team that has helped win the two previous games.

Will SRH finally get it together?

For Sunrisers Hyderabad, the story is completely opposite with their middle order looking fragile and bowling uninspiring. They still have a great opening duo off captain David Warner and Jonny Bairstow, but the support looks thin. Even their fancied bowling looked toothless with all the bowlers without any sort of form and rhythm. Manish Pandey is the most consistent performer for them, but he would love to come after a good start from Warner and Bairstow. Their rest of the Indian batting options like Vijay Shankar, Wriddhiman Shaha, Priyam Garg looked slightly out of touch and may also impacted by lack of confidence. Their alternates are also untested youngsters like Virat Singh and Abdul Samad.

Keeping this in mind, they may like to bring Kane Williamson in the eleven if he is fit but it will create team-combination nightmare for the management. Till now, Warner, Bairstow and Rashid Khan select themselves. If they bring Williamson at number three that would mean even more Indian youngsters in the lower-middle order who may falter during the pressure situation. Even their bowling also had many options and also too many questions. They have an Indian pace battery of Bhuvneshwar Kumar, Khaleel Ahmed, Sandeep Sharma, Siddharth Kaul and T Natarajan and which three of them will play on Tuesday can be anyone’s guess. They may opt for the experienced Billy Stanleke but again that would create the same problem as inclusion of Williamson. Hence, they may continue with Nabi and show some more confidence on his batting.

David Warner and his men have definitely not got the start they would have wanted to. Needless to say, they have a monumental task in hand when they face an unbeaten Delhi Capitals side in their third match. However, the Orange Army stands ahead of Delhi in their head-to-head count, SRH winning 9/15 games. We're definitely aware of how mighty and devastating the Orange Army could get.

Shreyas Iyer's DC must be high on confidence after two back to back wins. Although Bhuvaneshwar Kumar has bowled well, he is yet to pick up wickets. While Kagiso Rabada & Anuruich Nortje shared 5 wickets between them.

Key points to victory of SRH:

• SRH need their opening duo of David Warner and Jonny Bairstow to get going.

• Middle order needs to click; the team cannot be relying only on the top order.

• Swing King Bhuvaneshwar Kumar's magic could swing the game towards the Orange Army.

David Warner: Over the years, Warner is the main run-scorer for Sunrisers and his form will be vital. Delhi may attack him immediately with Rabada and Nortje to gain the early advantage. Keeping in mind, his recent trouble against spin, a tight bowler in Patel can also be an option. Whether Warner can overcome these that would be vital for Sunriser’s chances.

Rashid Khan: Till now, Rashid Khan had a steady IPL. He started well against KKR and got Dinesh Karthik with a brilliant googly but finished with only that solitary wicket. Other years, Rashid generally look to contain the runs to create pressure for their pacers to utilize and get wickets. But with their pacers not looking that threatening, Rashid may try to bowl more attacking in coming matches.

Rishabh Pant: Pant played two important innings for Delhi Capitals but in both the innings he could not display his full flair and range of shots. In a good Abu Dhabi wicket if Delhi gets a good stat then Rishabh can again come at number three and may look to play a strokeful big innings.

Kagiso Rabada: Rabada is currently a top bowler in all three forms of the game. In him, Capitals have a great leader in their bowling pack despite his young age. There are multiple roles expected from him and he performed all of them with great success. He may bowl 1 or max 2 overs in the Powerplay. Can come back for 1 over in the middle overs and then will look to finish by bowling at the death. He has various options with him including a lethal yorker for the death overs.

Captain/Vice Captain: Someone like David Warner or Kagiso Rabada can provide lots of points and should be opted for Captain or Vice-captain. Similarly

Grand League Captain: If Jonny Bairstow gets going, he can provide lots of points with his big hitting.

Will this be the game where the pieces finally fall into place, kickstarting a fight for survival in the process, or will the Orange Army fall flat once again?