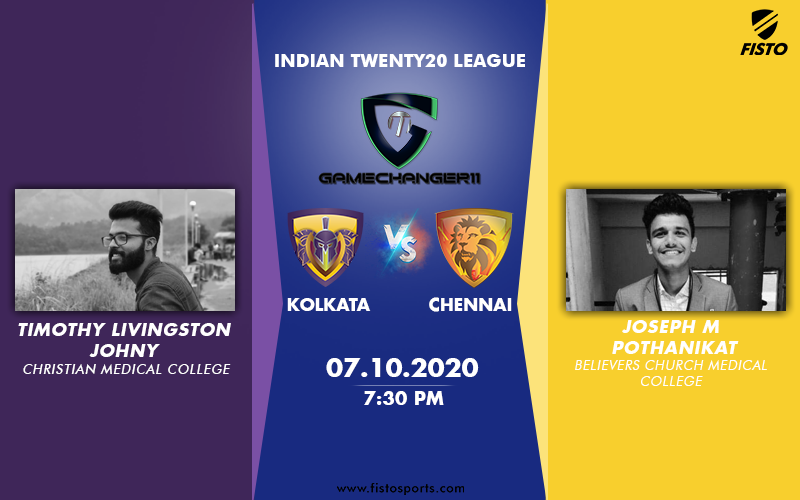 These are the games which shape a season. It's an unequivocal case of must-not-lose for both in Abu Dhabi, while victory could be priceless in the struggle to beat the drop.

Kolkata Knight Riders (KKR) square off against Chennai Super Kings (CSK) in match number 21 of the Dream 11 IPL 2020 as the serious part of the tournament is now arriving soon.

Teams will have to be extremely meticulous about their team plans and their execution as the third and fourth week of the tournament is often considered as one of the most crucial and important durations of the tournament. While the CSK would be heavily confident after the openers literally steamrolled passed Kings XI Punjab (KXIP) in the previous match, KKR have some issues and problems to address and would certainly want to not lose more time before it's actually too late. A resurgent CSK certainly look favourites in front of an under-confident KKR. KKR though would have a ground advantage as they have practiced in Abu Dhabi for a longer duration and it is their virtual home-ground. So they would naturally be more accustomed to the conditions than CSK.

The Men in Purple have a lot on their plate ahead of their super important clash against one of the most consistent sides of the tournament, CSK. Skipper Dinesh Karthik has been in the line of fire following his under-par performance in the IPL so far where he could only muster 37 runs in 4 matches. He has also been criticized for some questionable decisions like sending an out-of-form Sunil Narine for opening ahead of seasoned opener Rahul Tripathi and dropping Kuldeep Yadav.

Rahul Tripathi shone like a superstar in the match against Delhi Capitals (DC) in Sharjah and almost pulled it off for KKR before a clever delivery from Marcus Stoinis, got the better off him. Karthik has also been put in the dock for underplaying Kuldeep Yadav who was benched last game after bowling just 9 overs in 3 matches. As the conditions of UAE, will slowly and gradually become spin friendly with the passage of time, Kuldeep Yadav needs to play a more important role for KKR. This is the sole reason why KKR are unable to drop Narine and get a player like Tom Banton who has had an exceptional summer for England. After Tripathi nearly got KKR over the line, KKR would be itching to make Tripathi open with Shubman Gill and form a formidable opening pair upfront which can give KKR quality starts. With the presence of an underperforming Narine, pressure kept mounting for Gill and he couldn't play his natural game at times. KKR seriously need to place a check on these loopholes if they are to qualify for the playoffs this season.

After an impressive 10 wicket overhaul against KXIP, the Yellow Brigade face a tougher challenge in the form of KKR. There were a lot of loopholes in the team's balance and team combination for CSK and with the absence of Suresh Raina and Harbhajan Singh, CSK haven't looked the invincible side they always are during any IPL. They need to pull up their socks and get into winning ways and there's nothing better than this game. MS Dhoni's perennial batting position conundrum still haunts CSK as Dhoni hasn't been able to finish off games with the ease he used to do before. Overall, the team needs to plug some holes and with the comprehensive 10 wicket victory in the previous game, it looks as if they are a refreshed and fresh side with quality intent and positivity.

Key players to look out for

Undoubtedly, one of the best all-rounders to have ever graced the sport, Shane Watson was in hot, blistering form in the previous match against KXIP. Scoring 83 off just 53 deliveries, Watson's shot at redemption came quite smoothly. He'll be playing a very instrumental role at the top order for CSK and his form will be be very beneficial for the Kings. This is a result of the belief and faith reposed on him by the CSK team management and MS Dhoni. Chennai believe in continuity and that's the sole reason why Watson has been given so many chances. Once he gets going, there is absolutely no stopping the only second person to have scored a century in an IPL final (2018 final against SRH)

After a stellar performance in the previous match, where the young opener almost finished it off for KKR, Rahul Tripathi would be brimming with confidence and is most likely going to open for KKR. "Morgan was calm and kept telling me 'let's do this and stay calm'. We were making a game out of it but unfortunately couldn't finish" said Tripathi. Surely when you're batting with a world cup winning captain, you're bound to learn a lot. Scoring 36 off 16 deliveries, Rahul Tripathi was very impressive and a legion of cricket pundits and fans lashed out at the KKR team management for playing him so down the order. Having already opened for Rising Pune Supergiants (RPS) in the IPL, Tripathi is certainly going to bring alot of stability and positivity in the opening position for KKR.

We had an exclusive conversation with Joseph M Pothanikat of Believers Church Medical College and he opined that:

IPL 2020 has so far been a rollercoaster ride with no team having a clear edge. After a thrilling win against the defending champions Mumbai Indians, the Chennai Super Kings has suffered three back to back loses. It is high time, the CSK put an end to their losing streak and find their winning formula.As well known in the cricket world,  there is no  team other than the might CSK lead by our 'Thala' Dhoni,  that  is  most capable of bouncing back and surprising the fans.

CSK opening pair has failed miserably so far in this IPL with veterans Watson and Vijay struggling to score. Faf Duplessis has been their sole performer and has been in tremendous form. With all-rounder Dwayne Brave back in the squad, the team looks stronger and deep. Coming to the CSK bowlers, they have been doing a decent job. Losing their 'Chinna Thala' has been a major setback and players like Rayudu should step up and fill this gap.

A win against the in-form KKR is much needed for Dhoni & co to stay in the hunt. A good opening partnership, tight death bowling, and more intend on the field will be crucial for CSK against KKR. Dismissing the inform Shubhman Gill before he gets into his groove is vital.

The dangerous Caribbeans Andre Russel and Dwayne Bravo will lock horns for the first time in IPL 2020 and they surely will have tactics to outplay each other. Being one of the most successful teams in IPL, the expectations from CSK is huge. But CSK should just take this pressure off their minds, stick to their plans, and get a win under their belt.

We had an exclusive conversation with Timothy Livingstone Johny of Christian Medical College, Vellore and he opined that:

It is an important match for KKR to keep their spot in TOP 4. The main problem that KKR facing is the form of Sunil Narine and Captain DK. Narine couldn't do the acceleration that he used to do in Indian grounds in previous matches, which could lead a way for Rahul Tripathi to open the innings with Gill. Players to watch are Nitish Rana, Eoin Morgan and the young guns Mavi and Nagarkoti. If russel also get his form back, no doubt it's KKRs night.

Match prediction: CSK would be the winner