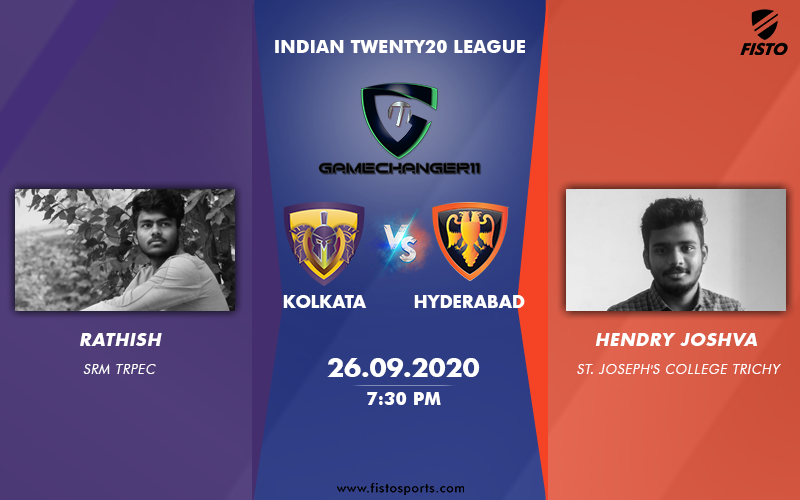 Preview – KKR vs SRH: Both teams looking to bounce back after opening defeats

The pair will be keen to restore confidence after less-than-pleasing performances in their opening games.

The Indian Premier League 2020 has completed its first week and the second Saturday of the tournament will see David Warner’s Sunrisers Hyderabad face Dinesh Karthik’s Kolkata Knight Riders. Both teams had terrible starts in the tournament and would like to overcome quite a few issues to register their first win in the competition.

SRH batting in a lull

SRH had a stunning batting collapse in their first match against RCB. They were already battling injury for Kane Williamson before the match and had an inexperienced middle order including Priyam Garg and Abhishek Sharma. Their another overseas star Mitchell Marsh injured his ankle while bowling his first over and could deliver only four balls before limping-off the ground.

Later, it was announced that Marsh is out of the entire tournament and they got the West Indies captain Jason Holder to replace him. If Holder is available tomorrow, they may opt for him or Mohammad Nabi in Williamson’s absence as Vijay Shankar did not look confident while batting or bowling. Both Holder and Nabi are world class all-rounders and depending on the pitch and condition they may opt for the seamer or the off-spinner.

SRH also have a good pace battery and although Sandeep Sharma and T Natarajan played in the first match along with the experienced Bhuvneshwar Kumar but in case, they want to bring a change they have the options of Khaleel Ahmed, Siddharth Kaul and Basil Thampi. Warner is not in great form and having difficulty in handling the spinners. If KKR pacers could not dismiss him early, we may see Sunil Narine being introduced early like the previous match.

Hendry Joshva from VSP Academy, Trichy has voted for SRH. His views are mentioned below.

Nabi will be replacing marsh. Venue is Abu Dhabi so that it is bigger ground when compared with other ground.

Bairstow and Warner should give a solid start and one should take over the innings to finish-off at high score. Then Nabi and Rashid Khan will be key players of the match. Because both of them bowl really well in this kind of wicket. SRH batsman should be careful with the opponent spinners. They should be doing their homework. KKR key batsman will be Russell. T Natarajan will be a stock bowler to use over  Russel  by bowling Yorkers.

KKR also had an overall disappointing match where both their batsmen and bowlers looked short of match practice and out of their depth. Their fast bowlers kept bowling short to Mumbai Indians batsmen and kept getting punished. Kuldeep Yadav could not create an impact and went for plenty. Even their big-money purchase Pat Cummins also had the same fate. Shivam Mavi was a surprise inclusion for KKR but finish with 2 wickets. Narine was also steady to finish with 1/22 in his four overs.

A huge chase of 190 plus was going to be difficult and KKR never looked like seriously threatening the target. Most of their batsman could not get set. Even experienced campaigners like Eoin Morgan and Andre Russell could not stay long to have a serious go at the target. Their choice of Nikhil Naik at number seven was complete failure and they should opt for Rahul Tripathi for that position or play him in the top order to add some more stability at batting. Overall, KKR looked like, they are still finding their best possible eleven.

The venue is Abu Dhabi. The average score on this venue is around 160. In this wicket, we can't expect a lot swing but it will be a decent wicket for fast bowlers.

If Kuldeep and Sunil Narine perform well and make tougher for batsmen it will be a boost for other bowlers.

Toss will not be a matter in this wicket. If KKR bat first they should score above 170 to defend if they bowl first, they should restrict SRH under 160 for an easy chase.

We can expect Narine at the power play to get Warner and Bairstow.

If the front-line batsman struggle then KKR can restrict them under 160.

We can expect a good start from Narine and Gill. Last match Gill doesn't get a good touch but he will be doing his work to perform well. The last match Eoin Morgan and Cummins had finished their quarantine 3 hours before the match. So that, the conditions are not easy to adapt.

We can expect a better performance from Morgan and Cummins because they are used to the conditions.

Then Russell batting order can be changed according to the situation.

At last, if as soon as possible they get out the front-line batsman they can set up an easy win. KKR batsman should carefully handle the Yorkers of Natrajan and the googly from Rashid Khan.

At last, if KKR bat first they should score 180 to defend and if the chase they should try to defend then under 160 for a comfortable win.

There will be no change in the 11, but we can expect changes in batting order

One down – Nitish Rana

The remaining will be the as usual.

Both teams have some great players and there will be quite a few mini-battle during the match. Warner vs Narine and Russell/Morgan vs Rashid could be two of the most tempting contests in a match where both the teams will know that another slip up can push them far behind in the race to top four.

So far, out 17 encounters KKR have won 10 and SRH have managed to win in seven fixtures.

Jonny Bairstow: Bairstow did not start the English summer very well but as he kept playing matches, he found his rhythm and came to IPL on back of a century against Australia in the ODI series. Despite the loss in their first match Bairstow score 61 and till the time he was in the crease it looked like the match was in SRH’s pocket.

Bhuvneshwar Kumar: Few seasons back Bhuvneshwar Kumar looked like one of India’s best bowler in the IPL and overall T20 cricket. He could bowl yorker at will and was able to both contain the runs and take key wickets. Injuries in last couple of years has impacted his form and he may not be as dangerous like before but he generally bowls well against KKR and will look to get some form back early in the tournament.

Andre Russell: Even Andre Russell could not take KKR to a win against MI’s huge target but he would hope to be back to his best soon and start hitting those huge sixes. He was in decent form during the recently concluded CPL and one big innings should nicely warm him up for rest of the IPL.

Sunil Narine: Narine plays an important dual role for KKR. His bowling may not be as dangerous as the 2012-2014 phase but still he provides lots of stability in KKR bowling with his four overs during the middle overs. His other key contribution comes while opening the batting as he plays a fearless brand of cricket to take KKR to a flier more often than not. Against MI, he was not comfortable against the short pitch bowling from Trent Boult and James Pattinson. It will be interesting to see whether the Indian bowlers of SRH can take a leaf out of their book and whether Narine can overcome that challenge successfully.

Captain/Vice Captain: Quite a few big names are playing in this match. Any two from Russell, Narine, Bairstow and Warner can take these spots.

Grand League Captain: Rashid Khan is always dangerous in T20 and can provide key points against a slightly out-of-form KKR batting line up.

KKR v SRH - Both sides are looking to bounce back from opening game defeats. Who can do that by winning tonight?