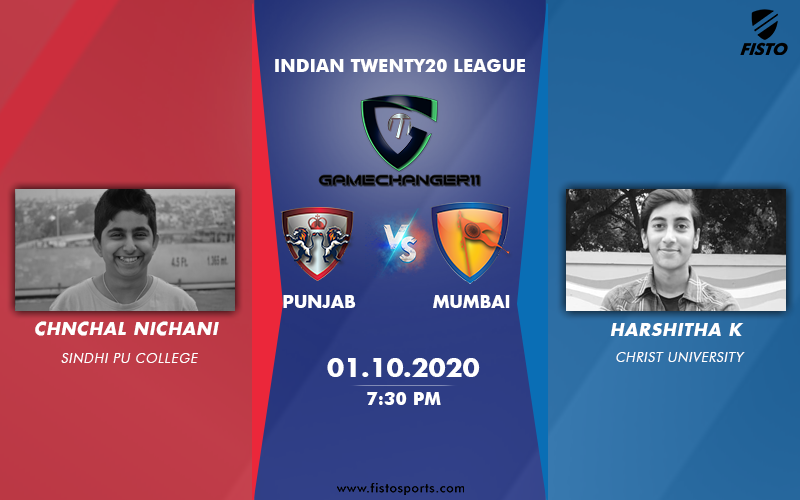 Thursday's tussle between Mumbai Indians and Kings XI Punjab has the all the makings of being a good game. Both sides are desperate to put concerns to bed after suffering two defeats in three games and hoping to regain winning momentum in the IPL season.

After RCB’s stunning win over MI in Dubai, and KXIP’s unexpected defeat at the hands of Rajasthan Royals, both Mumbai and Punjab will collide head-on against each other for a win at Sheikh Zayed Stadium, Abu Dhabi. Both teams are desperately looking for a win after they had suffered a couple of consecutive defeats in their last two matches.

Mumbai lost the match against RCB in a super over despite’s Pollard’s 60* and Kishan’s valiant 99, batting second. Likewise, Punjab also lost the match despite putting a heavy total of 223 on the scoreboard against Rajasthan Royals, batting first. However, RR’s troika of Samson (85), Tewatia (53), and Steven Smith (50) helped their side snatch a famous victory, chasing 223.

But, all is not lost for Punjab and Mumbai. KXIP need to ensure that they play as an integrated unit against Mumbai. Taking MI lightly means Punjab will have to ready for bizarre outcomes. MI players know how to turn tables when victory is nowhere in the sight. They had proved it true at the last match before RCB crushed them at Super Over.

IPL is not all about batsmen. Eventually, it’s the dot balls, crucial breakthroughs, turns, and remarkable catches that win matches. Who knows it better than Punjab’s Mohammad Shami, the strike bowler.

Shami has enough variations in his bowling arsenal. Shami is the joint purple cap holder with Kagiso Rabada. Both Rabada and Shami have scalped 7-7 wickets each at IPL 13, until now.

When it comes to batting, Punjab’s KL Rahul and Mayank Agarwal are in sublime form and following each other for the orange cup race at IPL 2020. KL Rahul (222) is the leading scorer in the tournament followed by Mayank Agarwal (221).

Mumbai’s prime targets will be to dismiss KL Rahul and Mayank Agarwal early in the match. KXIP openers can literally take the game away from their opponents once they set the tempo. MI need to stop their flow of runs from the very first ball. If either of them scores big for the side, then no doubt, Maxwell, Pooran, and Neesham will make the best out of it putting a big total on the scoreboard.

We discussed Punjab’s team strategy with Chnchal Nichani, Sindhi PU Collge, Bangalore. She stated Punjab will have a strong chance to beat Mumbai tonight. She further stated as follows;

KL Rahul and his men have not yet got the start they wanted. Even though they scored more than 200 runs, they have won 1 out of 3 matches played so far. They have a great batting and a good bowling line up. Captain KL Rahul & Mayank Agarwal have been really consistent and their role is very crucial for Punjab and they are now playing against Mumbai Indians who are also desperate for a victory.

Mumbai Indians also have lost 2 out of their 3 matches. Big hitters like Hardik Pandya, Kieron Pollard are a big threat to Punjab.

The bowlers have to try and contain runs in the death overs.

Kings XI Punjab are likely to opt for Chris Jordan in place of Sheldon Cottrell for tonight’s big clash against MI. Sheldon gave away 52 runs in just 3 overs at 17-RPO. Apart from this, Punjab’s head coach and mentor, Anil Kumble, isn’t ready to do too many changes in the team.

Mumbai skipper Rohit Sharma will be quite delighted with the way his team batted, chasing RCB’s stiff 202-run target. Apart from the super over fiasco – when Pollard couldn’t even hit a couple of big sixes owing to Navdeep Saini’s surreal bowling, MI batted well in the match.

MI put just 7 runs on the scoreboard at super over, which RCB easily chased down with a ball to spare – and got the crucial 2 points under their belt.

When MI step out on the field against Punjab – Rohit Sharma and Co. will try to win this match under any circumstances. MI doesn’t have too many woes when it comes to their batting as their order is likely to score big against Punjab.

In the bowling department, Mumbai are hopeful that Jasprit Bumrah will get back his rhythm back. Meanwhile, James Pattinson is also giving too many runs in the slog overs – something that MI need to stop from now onwards.

MI’s head coach Shane Bond also warned that they won’t allow any easy runs to KL Rahul or Mayank Agarwal at the top. Mumbai’s ultimate target will be to restrict Punjab at a modest total, something around 175.

However, Punjab aren’t likely to fall into Mumbai’s trap.

According to Harshitha K, Christ University, Bangalore, Mumbai Indians are a well-balanced side and they needn’t worry about their team combination. Here’s what Harshitha further predicted about KXIP Vs MI’s match;

MI need to take a cue from the previous game in Abu Dhabi that happened between SRH and DC.

Whether Mumbai bat first or chase, the batsmen need to just take time and settle down before going for big shots, and since the ground is big, running between the wickets and taking doubles will be crucial.

Coming to the bowling, Abu Dhabi did assist the spinners in the previous games, so Rohit has to utilize his spinners well and look for early wickets and breakthroughs.

Since KL Rahul and Mayank Agarwal have scored the majority of the runs in this IPL for KXIP, if Mumbai manages to get those two out early in the game, MI will have a greater chance of winning.

MI’s top-order needs to fire if MI wish to post a big total on the scoreboard. Ishan Kishan and Pollard definitely played well in the last match, but Rohit Sharma, Hardik Pandya, and Surya Kumar Yadav also need to get runs in the initial overs. They can’t always wait for the lower middle order to take the game forward and play big knocks.

Mumbai and Punjab have played 24 times against each other. MI won 13 matches, while KXIP prevailed over 11 of them.

Players to Watch Out For

The hype is for real. You can’t overlook Mayank Agarwal. He’s the one who either gives a flying start to his side or plays the role of a sheet anchor while skipper KL Rahul takes charge. Mayank is just 13-runs short of scoring his 1500 IPL runs, which he is likely to achieve tomorrow.

Punjab Skipper K L Rahul is in vehement form these days. He’s already got 2199 IPL runs with 17 fifties and 2 centuries. Lokesh Rahul is on top of the Orange Cap holder’s ranking with 222 runs from 3 matches. His excellent cover drive and lofted shots are nothing short of a pure delight to the eyes of his fans. Team Punjab expects another match-winning knock from the 28-year-old!

Everyone knows Ishan Kishan’s brilliance and talents, but the way he shaped his 99-run knock against RCB at dire circumstances was really astounding. It enhanced the level of expectations from him. Ishan Kishan played a brave knock, though for a losing cause, but it’s just the beginning. The 22-year-old is once again all set to play another fine knock against KXIP.

Mumbai Skipper was dismissed early in the last match, but he’s likely to bounce back against KXIP.  Rohit Sharma has got plenty of shots in his batting armory up the order. He is all ready to lead his side from the front. If the stylish right-hander safely negotiates the initial overs, then no target is too big for MI.

The track at Sheikh Zayed Stadium is slower than the two venues. The average first innings score in the four games this season is 165 runs.

Ishan Kishan, the left-hander from Patna, returning from injury displayed excellent temperament and great power hitting which almost took Mumbai to victory. He hit 9 sixes in his innings of 99, He can be a real game changer in your fantasy team.

Mayank Agarwal, the Karnataka batsman is just 1 run behind his captain in the race for Orange Cap and will be looking to over haul him today. He has scored his runs at an impressive strike rate of 176 with 11 sixes and 21 fours to his name.

Mohammad Shami is in great form with the ball. He has picked up 7 wickets so far in the tournament and is only behind Kagiso Rabada who also has 7 wickets but a slightly better economy rate.

Tricky game in store on Thursday, as both teams are looking to get back to winning ways. But who will walk away with the victory?