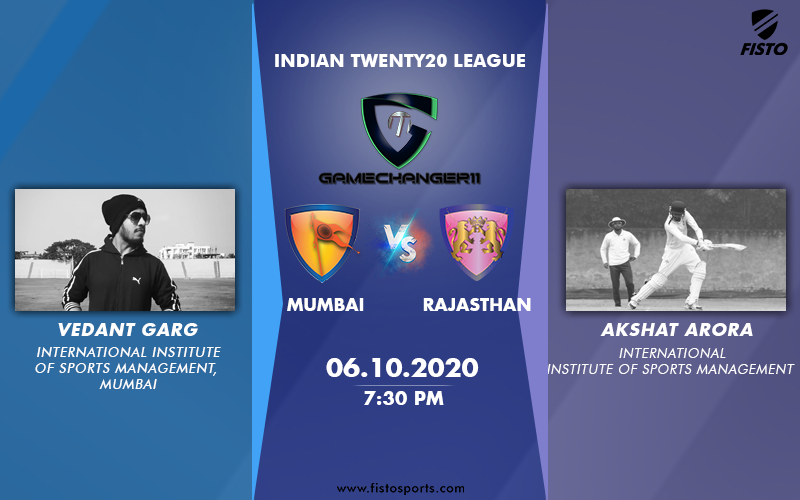 After the agony of the last two defeats, Rajasthan Royals face an in-form Mumbai Indians this Tuesday.

MI have been delivering consistent performances match after match. Their spirit is on cloud nine these days. MI want consolidate their position on top of the IPL points table with a win against RR, too.

RR’s morale is a bit low after their shocking defeat at the hands of RCB on Saturday. They could put just a 154-run target for RCB, and the latter claimed the same with five balls to spare and 8 wickets in hand.

Overall, MI vs RR match is going to be a crucial one. Both teams have quality pinch hitters on their sides, and until the last ball is bowled, it’s impossible to determine which team will win. One who withstands the pressure and holds one’s nerve till the last ball of the match will eventually prevail.

MI skipper Rohit Sharma is batting outstandingly well this season. He is currently positioned himself at Rank 4 in a race to IPL orange cap. He is already got 176 runs from 5 matches. He forms a formidable opening pair with Quinton De Kock on top.

In MI’s three wins, either of the batsmen played well. Barring a couple of matches, even Kock contributed well scoring 115 runs at a strike rate of 140 at IPL 13.

RR speedsters, Jofra Archer and Unadkat or Varun Aaron need to target MI openers with slow deliveries in their first spells. They need to bring some variations to trouble MI openers. Both Kock and Rohit are natural hitters and only a combination of slower deliveries, Yorkers, and swings can restrain them from hitting big shots.

MI have a solid middle order with the likes of Ishan Kishan, Pandya brothers, and Pollard, are all in tremendous form. RR need to maintain a strict line and length throughout MI’s innings to keep their run-rate under control.

According to Vedant Garg, International Institute of Sports Management, Mumbai, MI would continue with the same batting strategy that they followed against SRH.

Vedant opined that MI want to keep wickets in hand until 14-15th over, following which their middle-order adopts the beast mode.

Mumbai will cautiously play against Archer and score against the rest of the bowlers keeping diagonal boundaries in mind.

A decent 180-190 would be enough for the pace battery – Bumrah, Boult and Pattinson to defend.

If MI bowl first, Burmah and Boult must bowl the initial 4 overs and try to get a couple of wickets of either Buttler, Smith, or Samson. It could make a difference of at least 50 runs in RR’s total.

Mi’s star-studded middle order can be extremely dangerous. The MI vs RCB’s super-over-saga is still afresh in everyone’s mind! At this match, Pollard and Ishan Kishan batted extremely well cruising MI almost to a thrilling victory before losing it in the super-over.

Mumbai’s bowling department consists of Boult, Pattinson and Bumrah. Boult has already chipped in 8 wickets while Pattinson and Bumrah have scalped 7-7 wickets apiece. The MI leggie Rahul Chahar’s role becomes important because RR have plenty of right-handers and he can create good pressure on them using his spins.

All is not lost for Rajasthan Royals. They can still make a strong comeback with a thumping win against Mumbai. However, it’s not going to be a cakewalk for Smith and Co.

Royals are keeping their faith alive owing to Smith and Samson’s fantastic form. However, Buttler’s form is a point of concern for them up the order. He could manage only 47 runs from 3 games so far.

Similarly, Robin Uthappa and Riyan Parag are also yet to get back their mojo. The left-handed explosive batsman Yashasvi Jaiswal might get a chance against MI.

Another big worry for RR is Unadkat’s lackluster bowling. As per sources, Varun Aaron might replace him for this match.

However, RR have big hope from Jofra Archer. The English all-rounder has chipped in 4 wickets at a bowling economy rate of 6.75-RPO at this IPL. Nevertheless, he’s a fantastic all-rounder down the order scoring runs at a staggering strike rate of 248 this season.

We talked with Akshat Arora, IISM, Mumbai, and he felt though RR started their IPL 2020 season with a bang but couldn’t continue the domination as the middle order got exposed. However, Akshat, is hopeful that RR will win against MI.

Akshat further said, adding, with Ben Stokes is still out for the match – and the ability Lomror showed against RCB, he can be trusted to handle the lower-middle order.

Smith should move at number 3 with Samson at number 4, Samson mainly plays spin too good and it would be a big advantage if he bats at number 4.

Due to the lack of left-handers in the team, Yashasvican can come in place of Robin Uthappa, and open with Butler. That also gives a Righty-Lefty combo on top.

Saving Archer's last 3 overs for the death is crucial as MI score plenty of runs in the death overs. Only Archer can stop that!

MI and RR clashed 22 times against each other with both RR and MI winning 11-11 each.

Key Players to Watch out For

Each passing day, fans’ expectations from MI skipper are rising at a mercurial level. Once again, all attention will be on him as he opens the innings for MI. If MI want to create initial pressure on RR, then Rohit has to shine. He’s the ability to set the tempo of the innings at ease by giving a magnificent start to his side in the first six overs.

Rahul Chahar’s excellent leg spins will Rajasthan Royals batsmen. As we already know that RR have a lot of right-handed batsmen, so Chahar’s leg-break and occasional googlies won’t give them any easy runs in Abu Dhabi. The gusty 21-year-old has already got 6 wickets in his kitty at this season

Sanju Samson has plenty of shots in his batting arsenal. He’s the one who never shies away from taking on bowlers or hitting them down the ground. His vehement form can be gauged from the very fact that he has already got a couple of man-of-the-match awards so far. In four matches, he scored 171 runs at an average of 43 and an unbelievable strike rate of 199.

The left-handed Yashasvi Jaiswal might get a chance to bat against MI. The 19-year-old youngster has tremendous batting techniques and stroke play to offer. With plenty of records under his belt, including the youngest player to score a double century in a List A – category match. Apart from that, he scored plenty of runs at the Under-19 world cup too last year.

Can RR make a comeback?