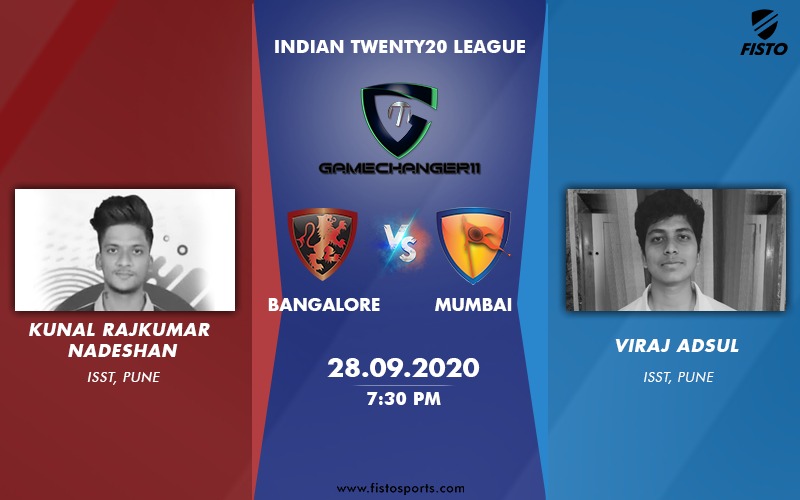 Image Credits: Who will prevail?

Royal Challengers Bangalore (RCB) and Mumbai Indians (MI) are all set to collide head-on against each other in Dubai at IPL 13, match - 10. Both teams have had their share of bad luck in this series in the first couple of matches.

MI faced a surprise defeat at the hands of CSK in the IPL opener when Rayudu and Faf cruised dad’s army to a famous win. While for RCB, their complete surrender to KXIP was unforgettable. Chasing a stiff target of 206, RCB’s batsmen were bowled out at just 109.

Both teams are being headed by two of India’s most valuable batsmen of team India; Virat Kohli (RCB) and Rohit Sharma (MI). RCB boast of having key players like Kohli, De Villiers, and Aaron Finch on their side, while MI’s team includes well-known match-winners like Jasprit Bumrah, Rohit Sharma and Pollard.

The good news for Mumbai Indians is Rohit Sharma’s form. MI skipper went out early in the first match against Chennai but came with a bang against KKR scoring a magnificent 80 off 54 balls with 6 sixes and 3 boundaries.

In-form Rohit Sharma is a dangerous indication for any team. He is known for his attacking batting up the order.

We talked with Viraj Adsul of The Institute of Sports Science & Technology, Pune, about the MI Vs RCB match. He opined that Mumbai are one of the strongest teams in the league and they have a healthy chance to win the title.

I have always been a big fan of Mumbai Indians. Sachin Tendulkar is one of my favorite cricketers. So, naturally, I fancied his IPL team.

They have a balanced playing 11 including brilliant batsmen like Rohit Sharma and Hardik Pandya and also a great bowling line up, not to forget Jasprit Bumrah! So, I feel that tonight’s match against RCB would be a cakewalk for MI.

MI have a good combination of experienced batsmen, bowlers, and fielders. Hardik Pandya, Pollard, Surya Kumar Yadav, Rohit Sharma, and Saurabh Tiwary are all in good form and likely to play well against RCB.

When it comes to bowling, Jasprit Bumrah’s four-over spell can be a game-changer. Trent Boult and James Pattinson’s 8 overs will be crucial too. Mumbai Indians are the defending champions, and won’t give in too easily against RCB.

On paper, RCB are a quite strong side. They have quality match-winners who can singlehandedly win matches for the team. However, RCB is a bit wary of its skipper Virat Kohli’s form.

The stylish right-hander got only 15 runs in his last two innings. He is all set to leave his poor form behind with a blitzkrieg knock against MI.

Can he get that? Well, only the time will reveal.

We discussed RCB’s match strategy with Kunal Rajkumar Nadeshan, an emerging cricketer, Institute of Sports Science & Technology, Pune. He felt that RCB will win against MI as they are looking for a big come-back.

After their humiliating defeat against Kings Punjab XI, Team RCB is fully prepared to stun MI.

They are one of the lead contenders to win the coveted IPL 13 trophy this season. With plenty of good cricketers and match-winners in their side, RCB will definitely look forward to a thumping win against Mumbai at Dubai.

RCB’s bowling could be a big issue. Umesh Yadav, has been consistently expensive this season. He gave 48 runs and 35 runs in his last two matches at an average economy rate of around 12 runs per over. Similarly, Protea’s legend Dale Steyn has also failed to make any big impact so far for the opponents.

The right-arm leggie Yuzvendra Chahal has been fabulously doing his job. He chipped in four wickets in RCB’s last two matches at crucial times with a good economy rate.

Once again, Yuzvendra Chahal has to produce another good four-over spell to contain MI’s flow of runs.

MI and RCB have clashed 27 times against each other. MI won 18 matches while RCB claimed victory at the remaining 9 of them.

MI will have an edge over RCB when both teams will face each other in Dubai.

Players to Watch Out For

Bumrah is an asset to any team. He was quite expensive against KKR giving away 32 runs in his four-over spell with 2 wickets. However, if you count his first three overs, then Bumrah gave just 5 runs in 3 overs. However, it was Pat Cummins’ late onslaught that smashed 27 runs in Bumrah’s last over.

Overall, Bumrah made a good comeback against KKR after he had been taken for a ride by the CSK when the latter smashed 43 runs in 4 overs at the first match. Bumrah was the most expensive with an economy rate of around 11-RPO against CSK. However, he is expected to bowl well tonight by making things difficult for RCB batsmen.

Mumbai Skipper is in a tremendous form. He is a dangerous opener with enormous experience and stroke-play in his career. Rohit Sharma’s 6 sixes in MI’s last match clearly indicated his swashbuckling form. The 33-year-old is the third-highest IPL run scorer with 4990 runs in his kitty.

Only Suresh Raina (5368) and Virat Kohli (5427) are ahead of him in terms of IPL runs. Rohit Sharma is all set to play another blinder against RCB. It would be a big challenge for the men-in-red to get him out early in the match.

The veteran South African batsman is always ready to play a big knock for his team. The Proteas batsman is fully poised to hit another big knock for RCB. He accumulated 79 runs in his last 2 innings at this IPL at a staggering strike rate of around 165.

Whether RCB bats first or second, De Villiers’ innings will be crucial to the team. He knows how to accelerate the innings or go slow depending upon the circumstances of the match. If De Villiers and a couple of RCB batsmen get back their rhythm against MI, then Bangalore can certainly outwit MI. Never underestimate De Villiers’ excellent fielding, which easily saves crucial 10-15 runs for his side.

RCB leggie Yuzvendra Chahal is in good form. He’s bowling well and can be a potent weapon for his side at relatively spin-friendly pitches of UAE. With four wickets in his last two matches, Chahal is likely to play another big role against Mumbai.

Chahal’s consistent leg spins with sharp turns can be a big challenge for MI’s openers; Rohit Sharma and De Kock. Both of them are good against spin deliveries, but a couple of dot balls in the start can make things difficult for Mumbai openers. Chahal has over 100 wickets from 84 IPL matches so far.

Pitch Report: The pitch at the Dubai International Cricket Stadium has been good for batting. The average score in the four matches that has been played here so far is 175.

Virat Kohli, having failed twice in a row, would be itching to get some runs under his belt. His form would be crucial for RCB’s chances this year. We can expect a solid comeback from India’s best batsman.

AB de Villiers is in great touch. He looked good in the last game as well before pressure got the best of him. With Kohli not firing so far, the onus of scoring runs is on him in the middle overs.

Aaron Finch has been in form and he showed glimpses of it in the two games but he hasn’t really capitalized on the starts he has gotten. If he gets going, we can expect some real power hitting display from him.