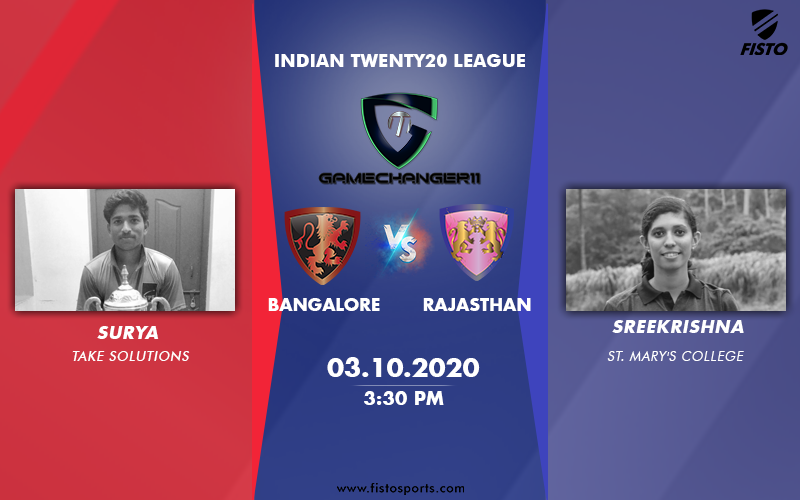 Preview: RR and RCB square off in battle of heavy hitters

Saturday gives us a pivotal meeting between 5th and 6th in the IPL 2020 table.

Royal Challengers Bangalore (RCB) lock horns with Rajasthan Royals (RR) in the 15th match of IPL 2020. This game holds significance as this is the first doubleheader of IPL 2020 and fans and cricketers themselves are going to be super excited for this fun-filled and super-exciting contest. Being held in Dubai, the dew factor is completely out of the equation as the match will be played in the afternoon and captains might not implement the strategy of bowling first to cut some slack for the spinners.

The two teams come on the bank of varied results and varied temperaments. While Virat Kohli's boys would be high on confidence after a super over thriller against defending champions Mumbai Indians (MI), RR would be on their toes after a comprehensive loss to Kolkata Knight Riders (KKR). These two points which are up for grabs from this match will be extremely crucial for both the teams and it calls for an exciting game to be witnessed.

While the likes of Devdutt Padikkal and ABD Villiers have got into the groove and are in rich veins of form, their best batsmen, captain Kohli is yet to launch himself in the tournament. If captain Kohli can produce a big score, then RCB are always at a better position to win and it naturally takes a lot of pressure off ABD. RCB's middle order has shown a lot of promise except Josh Phillipe who's been dropped after the first 2 games. Shivam Dube's six hitting prowess came into display once again when he scored 27 off 10 balls and powered RCB to a total beyond 200. These are good positive signs for RCB as they now do not need to heavily depend on their top order to perform.

When it comes to off-spinner Washington Sundar, no words can describe his magnificent spell in the last match. Having just conceded 12 runs in a game where 400 runs were notched up, speaks volumes of his scintillating bowling. With the dew factor gone through the window, RCB would look forward to Sundar's effective bowling.

RCB's perennial death bowling woes seem to have been put to rest as Srilankan pacer Isuru Udana and Indian rookie Navdeep Saini have stepped up the ranks. Saini just conceded 7 runs in the super over against MI at a time when Hardik Pandya, Rohit Sharma and the big hitting all-rounder Kieron Pollard were there on strike.

Miss this at your own risk. 🙂

Rajasthan Royals have a star-studded line-up and most of the impactful players in their team are in sublime form. Their most destructive batsman, Jos Buttler's waning form will be a slight headache for the RR squad but these international players have world class resilience and will stage a comeback with utmost grit.

The major loophole for RR has been their middle order. While Tewatia's fiery antics did pay off well in the match against Kings XI Punjab (KXIP), a bigger ground proved to be a little problem for him. And Robin Uthappa's waning form has raised further questions about RR's middle order.

Spearheaded by Jofra Archer, RR's bowling department looks settled and they might just pick Varun Aaron ahead of Ankit Rajpoot in this match. Jaydev Unadkat's pace variations might just be helpful in Abu Dhabi.

Key players to look out for

A controversial pick, but Virat Kohli is a batsman who redefines the very art of batting. The Indian team and RCB captain oozes class and has always been the backbone of RCB's batting line-up. He has looked off colour in this tournament so far with scores of 14, 1 and 3 at an average of 6. He would be raring to get back in form as his morale reflects the team's morale. With bigger grounds and Virat's ability to convert singles into doubles, we might well see captain Kohli initially anchoring the innings, get set and eventually go for the big, sublime shots. Dibs on a good performance from the champion player!

The biggest highlight for RR this season has been the batting of Samson. Displaying his prowess, Sanju Samson has bagged 2 man of the match trophies in the first 2 matches he played. Being overlooked by the National team selectors in most games and not being picked for Team India, Sanju Samson has loads to prove. A blistering start from Samson upfront would ensure Rajasthan reach and challenging total and a daunting one for the opposition or would place RR in a better pedestal if they are batting first. He's also a livewire on the field and with bigger grounds, we might as well as see, Sanju throwing himself at everything and stopping and catching blinders.

We had an exclusive conversation with SreeKrishna Nair of St. Mary’s College, Thirissur and she opined the following:

“RR led by Smith have the youngest team in the IPL but it doesn’t mean they lack experience of playing. The players are in good form and there is no doubt about the josh and spirit in the team. The likes of Sanju Samson and Rahul Tewatia have proved to be the key contributors and all players are very clear about their roles. In the bowling department Jofra Archer and Shreyas Gopal have the upper hand in deciding the match outcome. Their batting is in top form, so opting to ball first will be the best decision to control RCB’s runs and pave way for an easy chase”

Predicted Playing 11 of RR by SreeKrishna

We had an exclusive conversation with Surya of Take Solutions and he opined the following:

“RCB Is Heated Up After winning the Match Against MI. Kohli used W Sundar to his advantage in the previous match. The opening batting is Strong and Performing Well. ABD is In Form Too and After adding Udana Into the 11 it is a better left arm bowling Option and with Two Wrist Spinners in the team, they Look Ready To Win This match Against RR”

Predicted Playing 11 of RCB by Surya

Who will come out on top?