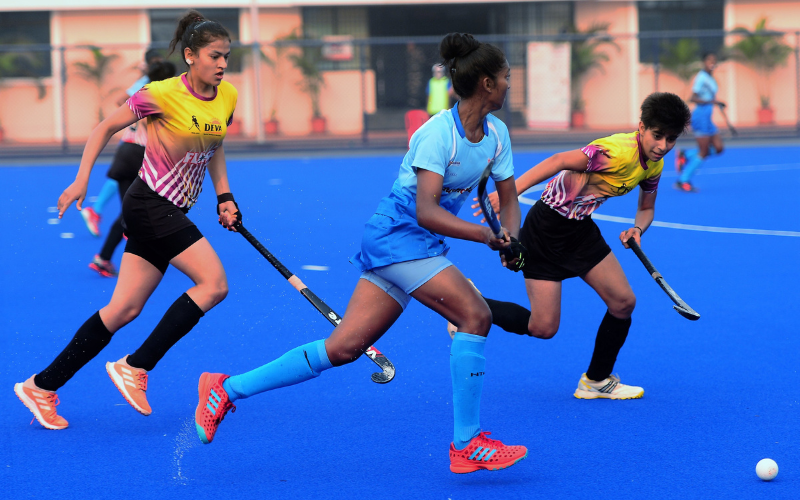 Each of the teams finished at the top of their respective pool standings and remains unbeaten over the course of the competition.

Speaking on his team's form and their Semi-Final clash up ahead, Head Coach Odisha Naval Tata Hockey High Performance Centre, Abhishek Mishra said, "We had a benefit early on as we are the home team and already acclimatised to the playing conditions here. Our pool matches were relatively easy so our players were not at 100%, but our Quarter Final was a tough match and there you could see the coordination and sharpness building in the team. We have seen our opponent SAI – Academy's matches and played a friendly against them before the competition as well. It will be a good match tomorrow as both teams have their own strengths, may the best team win."

SAI – Academy will be looking to continue to put up the same level of performance which has seen the team make its way to the Semi-Final of the 1st Hockey India Junior Women Academy National Championship 2021. After finishing the league stage without conceding a single goal, SAI – Academy reacted positively to falling a goal behind in their Quarter Final match against Salute Hockey Academy, eventually winning the match 6 – 2.

Ahead of their Semi-Final match, Head Coach, SAI – Academy Prakhar Patel said, "We performed well in the league stage and scored a lot of goals, but our primary motivation was to just to win matches and move forward. I am happy to see that we have coped well physically as due to Covid-19 all our centres were not open for a long time and players were mainly practicing at home. We organised a one-month camp before the competition to bring the players' fitness up to speed. For the Semi-Final, we know our opponents have home advantage, but based on our performance I am confident of our chances of making it to the Final."

Madhya Pradesh Hockey Academy Head Coach Paramjit Singh said, "Since the league stage our team has been taking a good shape and the players have been performing up to my expectations. We faced some good teams in the competition early on and came out on top. For tomorrow's match, I believe the girls from Khalsa Hockey Academy (Amritsar) have more experience, but we are at par with them; if not better, in terms of skill and physicality. They have been in good form, but I am confident of our chances in the match tomorrow. Overall, you can expect to see quality hockey in this match."

Khalsa Hockey Academy (Amritsar) has been in rich goal scoring form throughout the competition thus far and will be relying on the competition's top scorer Taranpreet Kaur (14 goals) to deliver the goods once again in the Semi-Final. Captain Simranjeet Kaur (11 goals) and teammate Sneha Sabharwal (10 goals) are also high up in the goal scoring charts for Khalsa Hockey Academy (Amritsar).

Speaking about their Semi-Final encounter tomorrow, Head Coach, Khalsa Hockey Academy (Amritsar) Amarjit Arora said, "We have done very well to be at this stage considering the fact that our full team is not here due to some key players appearing for their Board Exams. For tomorrow's match, I think our opponent has the upper hand as they have an excellent defence line filled with some top quality players. My main challenge is about how to approach this match tactically to nullify their threats and maximise ours. Their coach Paramjit Singh is a good friend of mine and I know which of my players he will focus on marking, so it will be a very good battle tomorrow."

The first Semi-Final between Odisha Naval Tata Hockey High Performance Centre and SAI - Academy starts at 07:00 hours, while the second Semi-Final match between Madhya Pradesh Hockey Academy and Khalsa Hockey Academy (Amritsar) is scheduled to get underway at 09:00 hours on 25th March 2021.