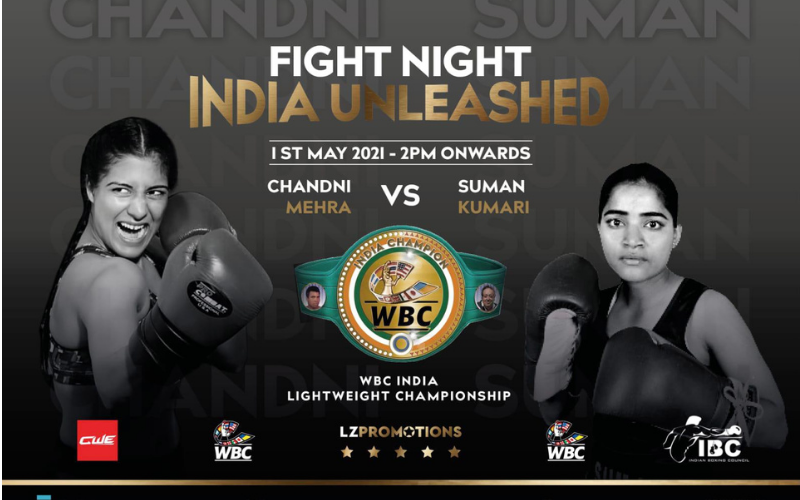 India's No. 1 female boxers Suman Kumari and Chandni Mehra will face off in the WBC Title Fight.

The World Boxing Council (WBC) is the most prestigious championship and one of the four major organisations which sanction professional boxing bouts globally. This is the first time ever that India will be hosting a title card sanctioned by the global body and contested by the two female fighters. Chandni and Suman have been India's No. 1 fighters in lightweight and featherweight categories and now will be challenging each other in this milestone bout aiming to become the first-ever WBC India Champion across both men and women categories.

"This is a game changer for Indian professional boxing. I always believed India has huge potential equally in men's and women's professional boxing. My focus is to build a platform for the boxers to establish themselves. My vision is to promote India's first-ever World Boxing Champion (male and female). I would like to thank the WBC for believing in my vision to propel professional boxing and especially give Indian female boxers the equal respect and opportunities as their male counterparts. The green/gold belt has been worn by illustrious champions in history including Muhammad Ali, Lennox Lewis, Mike Tyson, Floyd Mayweather etc. I'm very proud of all the boxers that will be participating in the event. Pawan Goyat, Pawan Maan, Asha Roka are some of the names that have fought on major platforms so a major coup to have them participate. I'm really excited to initiate this historic move and hope to contribute in creating a historic chapter for boxing and professional boxing in India," said Parm Goraya, CEO of LZ Promotions and India Unleashed Promoter.

While the professional boxing scene in India is still in its early stages, the sport has a strong niche audience and followership in India. The lockdown saw all live sports taking a halt. However, since the lockdown was eased in September 2020, there have been 16 fight nights that have been sanctioned by Indian Boxing Council (IBC) and held so far. And then the world body like WBC backing a title fight in India for the first time is a testament enough of the rising popularity for the global promoters' interest in Indian pro boxing market.

"It's a great development for Indian professional boxing and gives us the confidence that we at Indian Boxing Council (IBC) are on the right path. I would like to credit Mr Parm Goraya and LZ Promotions for their vision and making this historic sanction possible in such a short time. This title card would definitely be a game changer for professional boxers as well as boxing in India," said Brigadier General of Indian Boxing Council (IBC) Muralidharan Raja, who have also been recently affiliated by the Asian wing of WBC.

The female boxers taking on each other for the Lightweight 140lb belt, as part of India Unleashed-Fight Night scheduled to take place on May 1, is not only historic but will also be a giant step for female professional boxers and boxing in India.