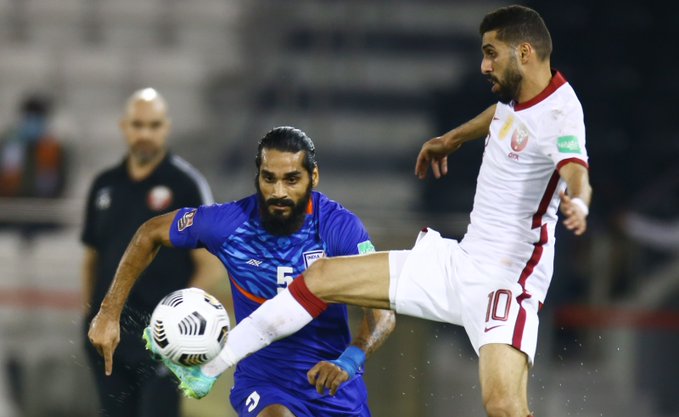 ‘Qatar is past’: India shift focus to Bangladesh match

The focal point has shifted, it’s no more about the fight put up against Qatar. That's the past. Rather, it’s now about the forthcoming match against Bangladesh in the FIFA World Cup Qatar 2022, and AFC Asian Cup China 2023 preliminary joint round qualification round. That's the present, also the future.

Call it the beauty or the tragedy of the bio bubble, the Indian and Bangladeshi contingent despite being in the same team hotel haven’t exchanged pleasantries in Doha so far – they haven’t met as yet. Different floors, different venues for meals, dedicated timings for gym sessions, and different venues for training.

Both teams had mixed results – while Bangladesh came back from behind to hold Afghanistan 1-1 and earn a point, India, despite fighting it out with 10-men against Asian champions Qatar did manage to win hearts, but returned empty handed.

Coach Igor Stimac is very meticulous. He never shouts, but simplifies and explains. He is patient, understanding. The boys feel it, nod, and work their hearts out.

Brandon Fernandes states, “We are moving as a team and we need to back each other. We are aware that we have specific roles in the team. The next match is extremely crucial as we need to sustain the momentum gained in the first match. The first match is history.”

You take a sneak peek into the Bangladesh camp, not in a direct face-to-face meet, but over the phone. “I am very pleased with the performance against Afghanistan. The players did very well on the field, and worked extremely hard. It reflects the attitude which this team possesses – to come back from behind and get back into the game,” Bangladesh coach Jamie Day mentions.

Captain Jamal Bhuyan, also the poster boy of Bangladesh football, who had played for Mohammedan Sporting in the Hero I-League, feels it’s “going to be an intense match” when the two teams take the field on June 7.

“It will be intense – with a lot of battles. It’s a beautiful match to be a part of. Last time in Kolkata we were disappointed not to get the 3 points as India scored very late in the game. We have that hunger in us, and we know we can do some damage,” he avers.

“The confidence in our team is good at the moment. We had our chances to win against Afghanistan. We take that confidence with us into the India game,” Jamal adds.

Day, nevertheless, mentions the difference in the ranking between the two teams. “India are a very good team. They are a much higher-ranked team than us who should be beating the likes of Bangladesh. The difference in ranking and quality is huge. In Kolkata, we did play very well. I look back and feel that India had an off-day on that night at the majestic YBK,” he expresses.

“You look at India’s last match against Qatar – with 10-men they fought like warriors and lost 0-1. It only depicts the quality in their side. We are looking forward to the game. We are aware that we need to play to our maximum, and hope India have another off-day.”

Defender Subhashish Bose, however, is quick to point out that the rankings don’t matter once you take the field. “We are aware of the quality of the Bangladesh team. They are a side that plays a lot of counter-attack football, and that is very dangerous. India versus Bangladesh have always been exciting and close matches. We have huge respect for Bangladesh,” Bose maintains.

Meanwhile, Bhuyan did admit that there are talks of him playing in the Hero ISL, but did clarify that “nothing is concrete as yet”.

“At the moment there is nothing concrete. But I think if I join the Hero ISL it would be a good move, and also there would be a huge following into the ISL from Bangladesh fans because they are crazy about football.”

India’s match against Bangladesh is scheduled for June 7 (Monday), the kick-off of which is slated for IST 7.30 pm. The match will be telecast live on Star Sports Network and Disney + Hotstar.