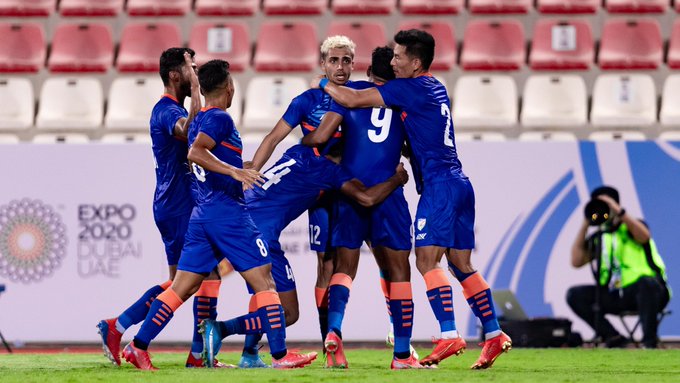 India U-23 National team defeated Oman 2-1 in their opening fixture of the AFC U-23 Asian Cup 2022 Qualifiers at the Fujairah Stadium in Dubai, UAE on Sunday (October 24, 2021). Rahim Ali (6') converted an early penalty, before Vikram Partap Singh (37') doubled the lead to earn a crucial victory on the night. Waleed Salim scored a consolation goal in added time but the three points headed India’s way.

Igor Stimac, after the recent success in the SAFF Championship in Maldives, got into the act quickly in pursuit of qualification to the AFC U-23 Asian Cup Uzbekistan 2022 for the first time ever since the inception of the tournament in 2013.

He started with experienced Dheeraj Singh under the woodwork and two full-backs in the form of Asish Rai and Akash Mishra to support the attacking moves. Deepak Tangri and Narender Gahlot were put in at the heart of the defence. India’s U-17 FIFA World Cupper duo Jeakson Singh and Suresh Wangjam (captain) manned the middle of the park, while Rahul KP and Vikram Partap Singh were deployed at the flanks. Rahim Ali and Aniket Jadhav were at the attacking third.

Before the opponents could settle in, Igor Stimac's boys started hurling attacks from both wings and in the fifth minute, Vikram earned a penalty that Rahim Ali calmly converted. Omani goalkeeper Ibrahim Yousuf had guessed the right way, but Rahim’s spot-kick was placed perfectly, as the ball went past the upright and nestled into the side-netting.

Six minutes later, Akash floated in a delicious cross from the left but the goalkeeper leapt above Aniket to grab it without any fuss. Vikram and Rahul, with their lightning speed, kept the Omani midfield on their toes throughout, something that helped them punch through for the second goal in the 37th minute.

Akash took on his own to penetrate the midfield and passed it onto an onrushing Rahim Ali, who rounded off his marker and pushed the ball onto an unmarked Vikram towards his right. The youngster made no mistake to slot it home past an onrushing keeper. That goal gave India the clear upper hand, as the two teams trudged back into the tunnel at half-time.

After the resumption, India could have made it three through Aniket Jadhav, but he was ruled offside. Rahul KP made one of his signature darting runs, as he cut in from the left, jinked past a defender, and unleashed a shot on goal, which was saved. Aniket was lurking nearby and tried to pounce on the rebound, but was flagged offside.

Stimac made a few changes towards the end of the game and the boys responded in a similar manner to hold their fortress against Oman.

Bryce Miranda, who was thrown into the fray on 71 minutes, almost scored his first goal in the 80th. Having played a brilliant one-two with Rahim Ali, he snuck into the Oman penalty box from the left corner but eventually miscued his effort.

In the final minute of the regulation time, Omani substitute Waleed Salim tucked in a cross from Abdullah Mohammed Al Balushi to halve the gap, but the Indian defenders clung onto their lead towards the final whistle to leave the pitch with all three points.

Following the win, India join the Kyrgyz Republic at the top of Group E with equal points and an identical goal difference. Indian are scheduled to face hosts UAE at the same venue at IST 10:00 PM on Wednesday (October 27, 2021) in their next fixture.