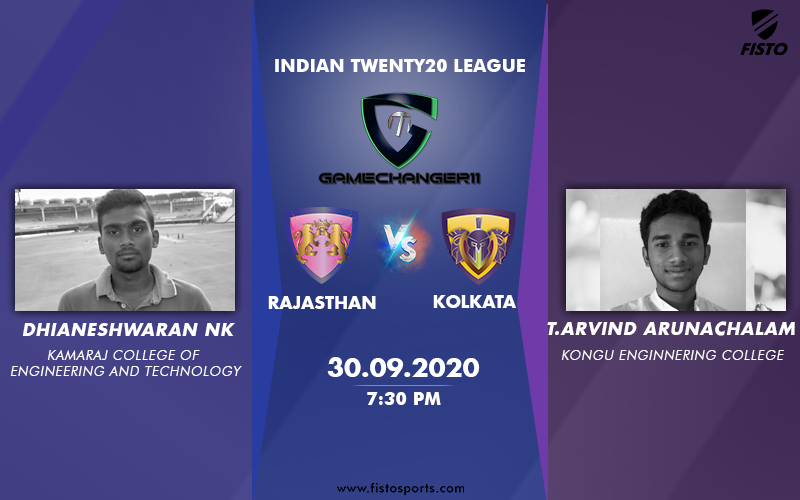 With both teams experiencing differing starts to their respective Indian Premier League campaigns, the clash at the Dubai International Cricket Stadium is already a mouth-watering affair.

Rajasthan Royals (RR) would be overtly confident in this match as they come on the back of a majestic heist of a victory against Kings XI Punjab (KXIP).

Rahul Tewatia, who was surprisingly sent up the order in a high-octane chase was surmounted with pressure after he got off to a horrendous start. He was 8 of 19 deliveries at a time and was swiping and swishing the bat in thin air before emerging as a hero after striking Sheldon Cottrell for 5 sixes. A dramatic turnaround of events.

On the other hand, Kolkata Knight Riders (KKR) too were comprehensive in their victory against the Sunrisers Hyderabad (SRH). After a bleak performance against Mumbai Indians (MI) in their opening encounter, KKR would finally take away some confidence from the brilliantly orchestrated win against the SRH.

It is going to be an even contest and its going to be very interesting to see how RR hold their ground and not get too complacent in this match.

Coming into the tournament, RR were potential favourites because of the amount of class and expertise, all it's players possessed. They had very good depth in both their departments and their overseas department was the deadliest and the strongest in the tournament. And here they are, living up to that mark and living up to those expectations. They would be brimming with confidence when they take on the field against KKR especially with Sanju Samson and Steve Smith in such hot, blistering form. But one thing RR will have to look out for is that the match is being played in Dubai which has a stark contrast when it comes to conditions and size of the stadium from Sharjah, where they played their previous matches. We've seen that acclimatization has been key and has often been the potential stand-out between teams. They will also be a little vary about their star bowler Jaydev Undatkat's performance as he has failed to take a wicket this whole season. Since KKR have 3 left handers in their top 5, Rajasthan might plan an off-spinner as the pitch in Dubai favours spinners a lot.

The Men in Purple would be itching to continue their winning form which they procured from the previous match. A complete team performance ensured they get their first points in the Dream 11 IPL and they would be looking forward to continuing this.

Shubman Gill and Eoin Morgan's partnership orchestrated the 7-wicket victory against the SRH. But there will still be a few questions looming around the KKR thinktank. Most importantly, the batting position of Sunil Narine will be a huge concern for head coach Brendon McCullum. Sunil Narine who was promoted up the order as a surprise pinch hitter by the previous KKR captain, Gautam Gambhir has not been able to produce good performances in this year's IPL batting up the order. KKR need more stability up the order and this would only ease up the pressure of Shubman Gill. KKR's bowling attack led by the experienced Pat Cummins looks pretty solid after a good performance in the previous match. They just need their new surprise addition, Varun Chakravarthy to bowl the way he did in the previous match and things would be pretty easy and simple for Kuldeep Yadav as well who easily gets bogged down with pressure.

KEY PLAYERS TO WATCH OUT FOR

Rajasthan Royals have played two matches and in both the matches Sanju Samson has been awarded the man of the match award. That in itself proves the fact that Sanju is a sheer classy player and possesses immense talent and grit. Been neglected from the Indian Cricket team for quite some time, Sanju would be desperate to present a strong case through these remarkable performances. An exceptionally agile fielder and a gun batsman, Sanju Samson is a vital cog in the Rajasthan Royal's batting line-up.

Sheer class and timing. That's what defines Shubman Gill's exceptional batting. His knock of 70 off 62 deliveries was the personification of sublime timing and class. He is a prodigy and the SRH bowlers would be quite vary of his precocious batting abilities. Scalping his wicket early on would pile up pressure on KKR's middle order and that's what's most beneficial for SRH.

We had an exclusive conversation with Dhinaeshwaran from NK of Kamaraj college of engineering and technology, and he opined the following.

Robin Uthappa should be promoted up the order. Mayank Markande comes in for Rahul tewatia and Varun Aaron for Jayadev Unadkat and David Miller in for Tom Curran. Compared to Jaydev Unadkat, Varun Aaron is a good bowler who has pace as well as bounce. So, in search of a left-hand batsman RR promoted Tewatia up the order. Rahul tewatia was promoted in last because RR did not have a left-hand batsman in the middle order. Uthappa is batsman who can play spin well.  Jofra Archer should be allowed to open the bowling with new ball instead of a one change bowler. When Smith opens the batting with Buttler . Samson at 1 is well set and Uthappa at no 2 is very good option according to me. So, Miller, Parag and Archer can finish the innings down the order without any pressure. Markande is a good choice when you play David Miller. Then Tewatia. Tewatia is batting all-rounder. So, he gives only 2 over option instead Markande gives all 4 over quota. Markande is a good bowler. Against Morgan bouncer strategy must be used. A leg spinner should be introduced against Dinesh Karthik and Shubman gill because they struggle a little against leggies. When Andre Russell comes to bat Archer should be given the ball. because Morgan is not good hooker of the ball when it is bowled shot and fast. When RR needs another all-round option they play Tewatia instead of Markande.

We also had an exclusive conversation with T.Arvind Arunachalam of KONGU ENGINNERING COLLEGE and VB Cricket academy and he opined the following.

“Definitely Steve smith will be the opener so that fast bowler who bowls the out-swingers, will have an edge so that is why I will choose pat Cummins and Shivam Mavi for in the bowling department. I will choose Varun Chakravarthy and Kuldeep Yadav to break middle order batsman like Tewatia and Jofra Archer.Shubham Gill and Narine will be my opening pair to maximize the power play. This will help KKR beat RR.

The track at Dubai has been pretty good for batting. Dubai has produced more entertaining games than any other venue this season. There have been two super overs already in just 5 games here.

Steve Smith has been in great form. He has scored 119 runs at a strike rate of over 160. He will be a good captain option for your fantasy team.

Jofra Archer, we all know, is lethal with his bowling but he also showed how destructive he can be with his batting. He has scored 6 sixes in the 11 balls he has faced in this IPL.

Andre Russell, the big West Indian all-rounder hasn’t had enough chances to bat yet in the season. He will be eagerly waiting for his opportunity and when it comes, he will surely unleash his power.

Pat Cummins was back to his best against SRH where he conceded only 19 runs in his quota of 4 overs and picked up the important wicket of Jonny Bairstow.