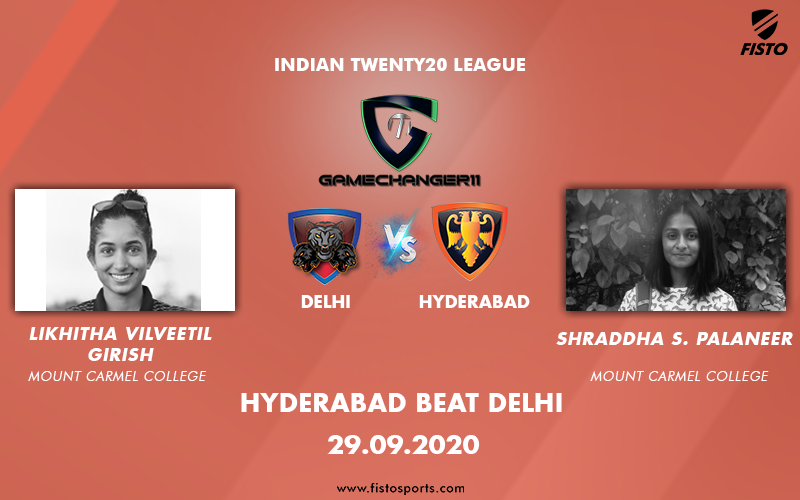 Sunrisers Hyderabad became the latest team to register their first win in Indian Premier League 2020 with their 15 runs win over Delhi Capitals in Abu Dhabi.

In a slightly slow, two-paced wicket, the Sunrisers bowlers deliver a great overall performance to restrict the Delhi batsman during the chase and handed over their first loss in this year’s IPL.

Shreyas Iyer later accepted that they have misread the wicket and also hoped for dew in the second innings. As a result, after winning the toss they asked Sunrisers to bat. SRH made two vital changes in their first eleven to bring back Kane Williamson, who was fit, and also gave a debut to the hard-hitting batsman Abdul Samad.

From the very beginning, the pitch was slow and the SRH opening batsmen David Warner and Jonny Bairstow took a more restrained approach in the powerplay. They added 77 runs before Warner was dismissed for 45 in the 10th over. Amit Mishra created few doubts in Warner’s mind and finally was successful to get his wicket. Mishra provided another breakthrough in his next over by dismissing Manish Pandey for just three. This brought Kane Williamson to the creese who displayed a T20 masterclass with his quick running and ability to find the gaps effortlessly. Bairstow reached his fifty and was out for 53 as Williamson was also dismissed for 41. Kagiso Rabada took both the wickets for DC. Rabada was Delhi’s best bowler and ensure that SRH could not go past 170. Eventually, SRH scored 165 for 4 in their 20 overs with debutant Samad remaining unbeaten on an impressive 12.

Delhi Capitals had an early blow when they lost Prithvi Shaw in the very first over. Shikhar Dhawan and Iyer provided stability and added 40 runs but could never take the run rate above 6. A brilliant Rashid Khan spell ensured that both Iyer and Dhawan was dismissed by the 12th over with more than 100 runs still to get.

Rishabh Pant and Shimron Hetmyer tried to build a partnership but some brilliant bowling from SRH bowlers ensured that the run rate is never close to the required rate. T Natarajan displayed a brilliant exhibition of T20 bowling as he kept delivering Yorkers at will creating lots of problem for the Delhi batsmen.

Bhuvaneshwar Kumar bowled a brilliant first spell and then returned to dismiss Hetmyer in his third over. When Rishabh Pant was also holed on in the deep square leg in the next over off Rashid the match was effectively over. Rashid finished the day with brilliant analysis of 3 for 14 and the Man-of-the-match award.

But it was a brilliant team display from SRH bowlers where everyone should be credited. Also, Warner had a good evening where he handled his bowlers intelligently and also inspired the other team members with his sharp fielding. Natarajan scalped Marcus Stoinis with the last ball of his fourth over to finish with 1 for 25. Kumar finished with 2 for 25 and although Khaleel Ahmed leaked few runs at the end he also took one wicket and was also unfortunate to have a catch dropped off his bowling. Even Sunrisers’ fifth bowler, young Abhishek Sharma also impressed with a steady four over spell to two left handers and even drop a catch of pant on his own bowling.

Shraddha S. Palaneer from Mount Carmel College backed the boys from orange army to win this match. She was on the mark with her prediction of a good opening partnership and some great swing bowling from Bhuvaneshwar Kumar. She also hoped for the SRH middle order to click and inclusion of Kane Williamson made all the difference for SRH in an area where they struggled considerably in the two previous matches.

Likhitha Vilveetil Girish from Mount Carmel College hoped for Delhi Capitals to continue their great start in the IPL 2020. However, their batsmen could not replicate their dominating batting display of the previous matches and struggled in most part of their 20 overs. The bowlers also failed to take the early wickets and no one except Rabada and Mishra looked threatening. They would love to welcome back Ravichandran Ashwin in the first eleven as soon as he is fit.

With their newly found confidence Sunrisers Hyderabad will now meet Chennai Super Kings on Friday and will hope to create some more troubles for the MS Dhoni-led side who have already lost their previous two matches. Delhi Capitals will have a longer break to ponder on this loss and think of any possible team-adjustment before they play their next match against Kolkata Knight Riders on Saturday evening.