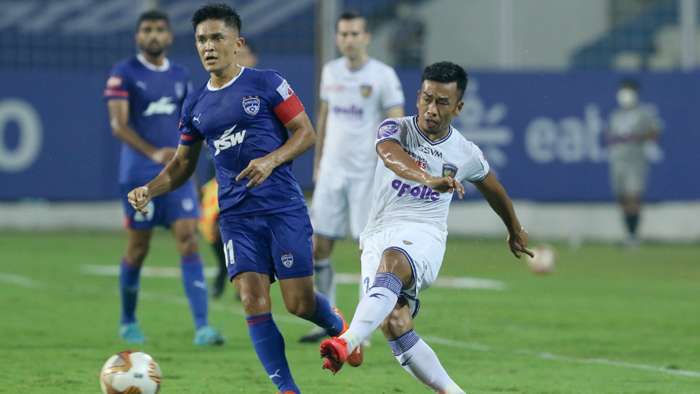 Chennaiyin FC have confirmed right-back Reagan Singh has extended his deal with the Indian Super League outfit till 2023.

A tough and resilient presence on the right wing, CFC fans will be overjoyed following Reagan's retention. The 30-year-old had joined CFC from NorthEast United ahead of the 2020-21 season in Goa.

"First of all I would like to thank the Chennaiyin family for believing in me. I feel proud to be part of one of the most successful teams in the country. I believe I contributed well and improved as a player in my first season. My ambition now is to help the club lift their third ISL trophy, and the first of my career. I will work hard and keep improving, and I would also like to thank all our supporters for their unconditional support," said an excited Reagan after putting pen to paper on a new deal.

"Reagan represents the strength and toughness in our squad. Having joined us with a wealth of ISL experience already, he improved our defensive ranks last season, while also proving to be a threat in the offensive areas. A solid team player, we are absolutely delighted to extend Reagan's stay with CFC. This is a reward for his consistent positive performances, and long may they continue. Also, being a senior player, Reagan is yet another leader of our troops," said CFC co-owner Vita Dani, as Reagan joins youngster Rahim Ali and Tamil Nadu fan-favourite Edwin Vanspaul, who also extended their stay with Chennaiyin recently.

Hailing from Manipur, Reagan began his professional career at Royal Wahingdoh in the I-League in 2012. After three years at the Shillong club, he signed for NorthEast United FC, where he spent five years, garnering solid ISL experience. Known for his composure in defence and bombing runs while going forward, Reagan proved to be a reliable outlet for CFC in the 2020-21 campaign. He helped Chennaiyin keep six clean sheets in his 18 games last season, also notching one assist while coming close on multiple occasions to scoring.

Reagan will be hoping to pick up from where he left off and improve on his impressive displays from a debut season for the Marina Arena faithful.