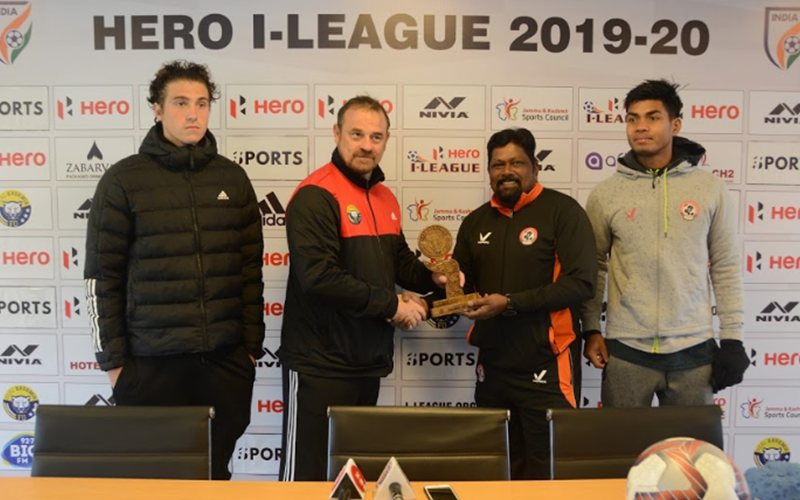 In their second of seven successive home games, the Snow Leopards from Srinagar, Real Kashmir FC are slated to take on former champions Aizawl FC at the TRC ground on Saturday, February 29, 2020.

This will be the first of three games on the Leap Day and is scheduled for a 2 pm kick-off. The game will be broadcast live on the Fancode app and website as well as the 1Sports channel and Facebook page.

The first-leg clash between the two sides happened on the first day of the month when Real Kashmir came out 2-0 winners, and now they will meet on the last day of the same month in the reverse fixture. Kashmir’s British recruits Mason Robertson and Callum Higginbotham had been on target in that game.

Further, Aizawl are in the middle of a month-long away trip while the hosts are just settling down after being on the road for over a month. The Snow Leopards' mid-table struggle and the Reds' despration to come out of the relegation zone will add more spices to tomorrow's game.

Real Kashmir coach David Roberston reflected that sense of calm and poise ahead of the game saying, “As always, we take one game at a time. In this league, you can't look far ahead as every team except Mohun Bagan are within a few points of each other. But with six home games coming, we are confident of picking up points.”

Stanley Rozario, the Aizawl strategist-in-chief, on the other hand, tried to put up a brave front before the tough game, “ My players are aware of our position on the points table. They know that we have to play three away matches back-to-back against Real Kashmir, Mohun Bagan and Punjab FC who all are strong and enjoying a positive run."

"It's a big challenge for us but my players are working hard and putting loads of effort in training and will come strongly against each club.” He signed off by saying, “In football, everything is possible.”

Rosario will have to find a way to tighten and organise his defence much more than what it has been this season, if he harbours any hope of beating Kashmir’s height, strength, quality and determination going forward.

From day one, the Snow Leopards have been boasting one of the strongest defences in the league and this season has been no different. The fact that Aizawl have multiple scorers in their quiver will surely concern Robertson ahead of the match. Moreover, the Snow Leopards have not only looked a goal-scarce side, but more often than not, depending on one or two of their foreign recruits to get them over the line.