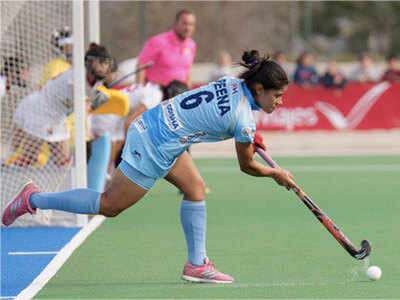 Reena Khokhar: 'My focus is on staying fit and securing a place in Tokyo-bound squad'

The 28-year-old defender said that the team has been benefitting through the mindfulness classes taken by their Analytical coach Janneke Schopman.

She further added, "We are just working hard because we have less than 60 days left. Everyone is focusing on doing things in a perfect way, and not taking any practice sessions casually. We don't have much time left, so every one of us is also paying attention to small things such as diet, fitness, and even being cautious of injuries because at present these little things really matter the most."

The 28-year-old defender emphasised that the team has been benefiting a lot through the mindfulness classes taken by their Analytical coach Janneke Schopman. She said, "We attend these sessions twice a week and do all the types of breathing exercises."

"I feel this has been helping us a lot to stay calm and be in the present moment during our training sessions. It creates a positive energy around the team, and it's a very good exercise introduced by both Janneke and our Chief Coach Sjoerd Marijne," she added.

Speaking about the advantage of having senior players in the team, Reena said, "They have been playing a very important role, apart from the coaches and support staff. A few of our senior players have experience of playing in the Olympics. They know the environment, and they know what it takes to compete in an event like the Olympics. Hence, they are not letting us take any kind of extra pressure, they just want us to focus on our training and give our 100% on the field because that is what is going to count in the end."

On being asked about how she is personally approaching the quadrennial event, the defender said, "The first thing that comes to mind is whether I will be in the team or not. And, obviously, this thought does play out in everyone's mind. But, that's not something I am really bothered about. I just want to keep working hard and keep doing what I have been doing without thinking too much."