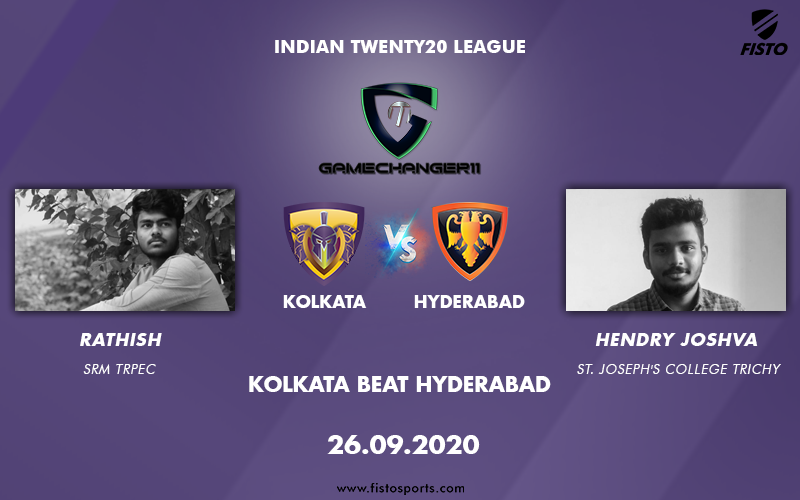 Kolkata Knight Riders registered their first win in the Indian Premier League 2020 over Sunrisers Hyderabad thanks to a very good bowling display and a solid partnership by Shubman Gill and Eoin Morgan while chasing.

David Warner won the toss for Sunrisers and decided to bat first. Both the teams made quite a few changes after losing their respective first match in the tournament. SRH opted for the all-rounder Mohammad Nabi, wicketkeeper Wriddhiman Saha and left-arm pace bowler Khaleel Ahmed in place of injured Mitchell Marsh, Vijay Shankar, and Sandeep Sharma. KKR on the other hand strengthens their bowling by replacing Nikhil Naik and Sandeep Warrier by Kamlesh Nagarkoti and Varun Chakravarthy. For both the players, it was their debut for KKR. After two years of waiting in the dugout due to injury, Nagarkoti finally got the chance to show his mettle for the purple and yellow brigade.

With two overseas openers for SRH, Warner, and Jonny Bairstow, Dinesh Karthik started the proceeding with his two best bowlers in Sunil Narine and Pat Cummins. The bowlers kept the things tight from the beginning and Cummins made a great comeback after his horror show in the last match. He provided the early breakthrough by dismissing Bairstow for just 5 on his birthday. Warner and Manish Pandey batted sensibly and added 35 runs in the next 5 overs. However, Warner was dismissed just after the first Strategic Time-out as he offered a simple return catch to Chakravarthy. Saha joined Manish but could not accelerate enough during this crucial phase of the game. Manish completed his fifty but just when he was looking to attack, he was dismissed for 51 off 38 by a high full toss from Andre Russell. Saha scored a 31-ball 30 and was run out in the 20th over. SRH completed their innings on 142/4 in 20 overs. All the KKR bowlers bowled pretty well and were on the money. None of them conceded more than 8.50 runs in the over and especially Cummings and Chakravarty were the stars for them.

KKR chase did not start in an ideal scenario. Although Gill looked set from the very first ball Narine could play only 2 deliveries and offered a high catch to Warner off Khaleel’s bowling. This is Narine’s second failure and will be a cause for concern for KKR team management. Clearly, the opponents now know how to contain Narine, the opener and now he needs to find a solution soon or KKR team management must adopt an alternate strategy of opening with Rahul Tripathi or Tom Banton. Nitish Rana came out after Narine’s dismissal and ensured that SRH bowlers could not get the dominate the proceedings. He played shots all around the ground and scored a quickfire 26 off 13 including 6 fours. However, T Natarajan induced an edge from Rana to Push KKR back. At 43 for 2, captain Karthik came out to back but a brilliant Rashid Khan googly ensured that the KKR captain back to the hut without scoring. A desperate Karthik even took the DRS review but it was a plumb LBW and the review was wasted. At 53 for 3, it looked like the Sunrisers can get back into the match but for KKR it was Eoin Morgan who came to the crease. After an uncomfortable early phase, especially against Rashid, Morgan was set and started to keep the scoreboard moving by taking regular singles. On the other side, Gill was batting confidently and duly got his first half-century of IPL 2020. The duo remained unbroken and added 90 runs in the fourth wicket. The win came with 12 balls to spare and helped KKR’s net run rate to take them above Chennai Super Kings and Royal Challengers Bangalore for now. Gill remained unbeaten on 70 and got the Man-of-the-match whereas Morgan finished on 42.

Hendry Joshva from VSP Academy, Trichy predicted an SRH win. But there were quite a few factors that went against his views. SRH lost an early wicket and while recovering they could not accelerate enough. Their spinners looked good in patches, but Mohammad Nabi did not look threatening as the KKR batsmen did not have the required rate pressure during the chase.

Rathish from VSP Academy, Trichy was quite up to the mark with his strategy for KKR. He predicted that KKR management could open the bowling with Narine to counter the Warner-Bairstow duo which actually happened. He also predicted a good showing from Morgan and Cummins as they are now more adapted to the condition which was also right on the money.

Sunrisers’ next match will be another test against a strong Delhi Capital outfit on Tuesday. Knight Riders will play their next match on the following day against Rajasthan Royals.

Does the KKR team look solid enough to win the 3rd title?