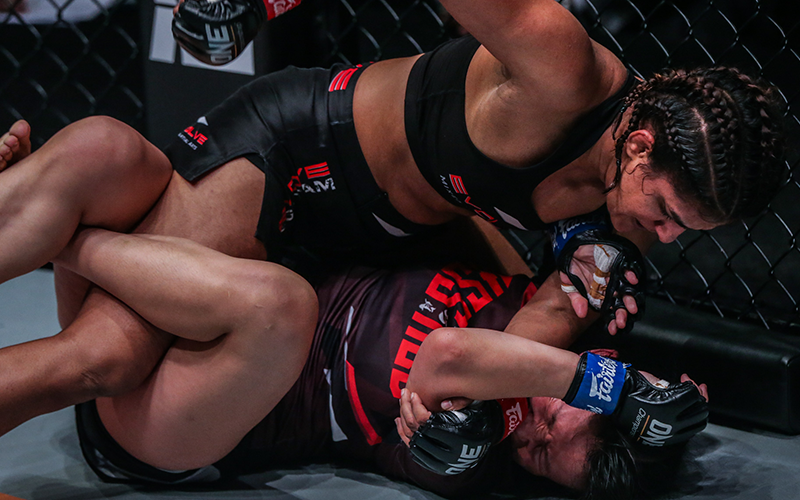 India’s champion wrestler-turned-Mixed Martial Arts (MMA) fighter Ritu Phogat continued to dominate at the ONE Championship as she notched up a win by unanimous decision against debutante Wu Chiao Chen of China at the ONE: KING OF THE JUNGLE held behind closed doors at the Singapore Indoor Stadium.

The Chinese, who has an 8-0 record as an amateur in MMA and has been a former JJIF Asian Jiu-Jitsu Championship gold medallist, was no match for the determined Indian in a heavily one-sided women’s atomweight contest.

Phogat controlled each of the three rounds by using her power and strength to force early takedowns of her opponent and kept her pinned to the ground. Wu tried hard to challenge the Indian in the second round but Phogat proved too strong in the grappling exchanges and did not give her opponent any chance to defend. The final round saw the Indian at her aggressive best as she kept landing deadly blows on Wu to be unanimously declared the winner by all the three judges present.

“Winning my second match at ONE Championship has been a very good feeling and my confidence level has been boosted further. I would like to thank my coaches and my Indian supporters watching. My goal of becoming India’s first MMA world champion is still a long way away but I will keep working with a lot of dedication to reach that,” said Phogat after her win.

Phogat’s victory follows a sizzling debut last year where she finished Nam Hee Kim in the first round by technical knockout. The daughter of the legendary wrestling coach, Mahavir Singh Phogat bagged the gold at the 2016 Commonwealth Wrestling Championships and a silver at the World Under-23 Wrestling Championships before making a smooth transition to the mixed martials arts. Training with multiple Muay Thai and Brazilian Jiu-Jitsu World Champions in Singapore has helped the 25-year-old amp up her striking and submission skills and she hopes that her continuing success will inspire more Indians to follow her path.

“I am thrilled to be representing India in MMA now. This is a growing sport and I foresee that it will be huge in India real soon,” said Phogat.

Away from home, ONE Championship athlete Ritu Phogat keeps herself busy with yoga, movies and books