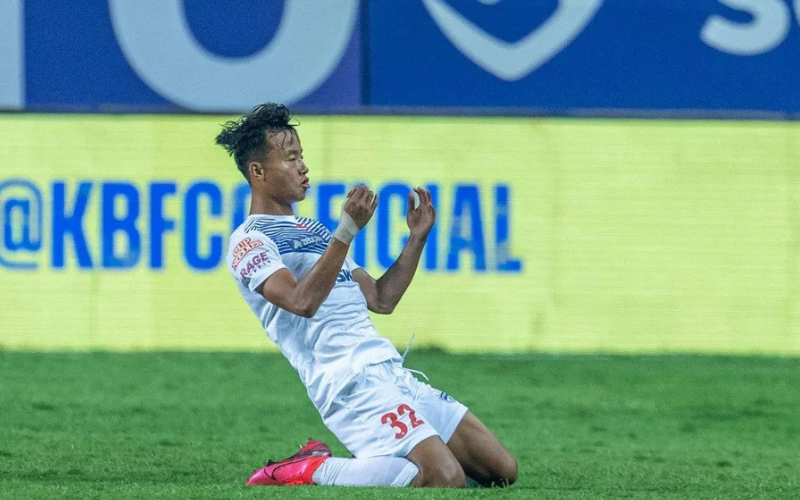 Press Release
Share
Roshan Naorem at the start of the Hero Indian Super League (ISL) season was just another name in the Bengaluru FC squad list that hailed from Manipur.
But as the season has progressed, Roshan has made it impossible for Indian football faithful to not notice him. And if there were any who weren’t aware of this budding football player doing special things in the Hero ISL, they would have stood up and taken note on Sunday when he fired a delightful free-kick past Prabhsukhan Gill, one of the best goalkeepers this season.
Roshan is the leading Indian assist provider in the Hero ISL this season with five assists and probably has the most deadly set-piece delivery in the league. Kerala Blasters FC came to know about it the hard way on Sunday as his goal ended their ten-match unbeaten streak.
Hailing from Samurou Makha Leikai, a small village in Manipur and coming from rather humble backgrounds, making a professional career in football was nothing short of a fantasy for young Roshan.
But he and his father never gave up on their dreams.
“I always worked very hard on my dreams and I played for many youth teams and it was my goal to always do well and become better because from a young age, football is what I wanted to do.”
“My father was my idol and he always supported me. He never failed to motivate or push me,” he added.
Roshan’s father made sure he got as many opportunities to play football as a kid and made him participate in many local tournaments.
He sensed that his child had it in him to make a mark in the sport.
His efforts bore fruit as Roshan was picked to represent Imphal West district team at the junior level. His exploits there helped him gain an entry into Thokchom Birachandra Singh Football Academy and later represent Birchandra Memorial Sports Club.
Soon the All India Football Federation took note of his talent and he became a part of the junior Indian national teams. He represented India at the U-19 SAFF Cup and the U-19 AFC Cup.
His performances then caught the eye of Bengaluru FC coach Naushad Moosa who managed to convince him to sign for the club in 2017.
For a kid from Manipur whose cherished childhood memory was a brief chat with Sunil Chhetri during a youth tournament where he had come as a special guest, having the same badge of his shirt as the Indian captain was a stunning turn of events.
“It was a great feeling to be a part of such a great professional club who had big names in Indian football like Chhetri bhai. I was very excited about the possibility of meeting him and getting an opportunity to learn from him,” he said.
Impressing in the youth teams of Bengaluru FC, Roshan was picked in the senior team by head coach Marco Pezzaiuoli for the AFC Cup in 2021. The German identified his ability to play multiple roles on the flanks as an asset to his set-up. And it’s fair to say that Roshan has thrived under Pezzaiuoli.
“The coach has been really supportive. The staff and everyone supported me. The key was that he gave me confidence to play my natural game. That was very important for me,” Roshan said.
Roshan has played on either flanks for Bengaluru FC this season and has played both as a winger and as a defender. His ability to use both feet equally well has added a different dimension to his game. For the 22-year-old who grew up playing on the wings, the switches in positions were fairly smooth.
“I started my career as a left winger. I have always played on the wings. For me, the advantage is that I can use both legs, so it's not that difficult to switch roles. Playing as a left winger and as a left back is almost the same,” he said.
Nine years on from meeting Chhetri as a youth footballer, he is now his teammate, a feeling that hasn’t quite sunk in for him yet.
“Chhetri bhai is an icon of Indian football. He always guides us, he gives us advice and it's an honour to be sharing the dressing room with him. He told me that no matter how many mistakes you make you shouldn't let your head go down. It’s sometimes hard to believe we play for the same team,” he said.
“I have many assists so far but my dream is to assist Chhetri bhai for a goal,” he added.
Roshan is living his ultimate dream in the Hero ISL but he isn’t ready to stop there. He is hungry for more.
“There are still many matches to go. I need to put my head down and work harder to improve and become better. It is a good feeling now but there is still work to do,” Roshan said.
“My goal this season is to play as many games for BFC and contribute as much for the team,” he added.
The way Roshan is going at the moment, it’s hard to not see him feature regularly in the blue of Bengaluru FC. And once that is achieved, he could then begin dreaming about donning another blue jersey with a different shade.
For a kid from Manipur who’s come so far, everything now seems in reach.