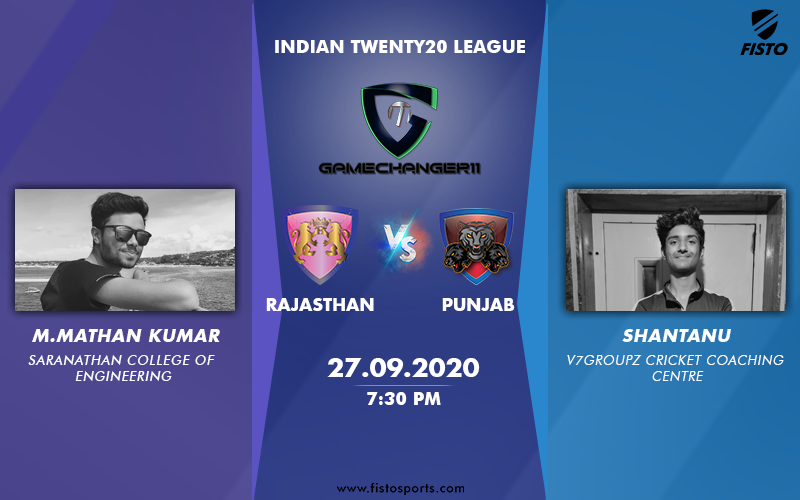 An upbeat Kings XI Punjab will square off against a supremely confident Rajasthan Royals in the 9th match of the Indian Premier League.

KXIP would be brimming with confidence after they inflicted defeat over RCB in top-notch fashion. KL Rahul will come into this match with utmost confidence and positivity as he absolutely crushed and steamrolled the depleted RCB bowling attack with his monstrous boundaries and flamboyant game-sense.

KXIP looks like a completely different side from what they have been in the previous seasons. There is a sense of fulfilment and each and every player has been contributing equally. RR on the other hand, would also draw a lot of inspiration from their emphatic win against arguably the best side in the league in terms of consistency, Chennai Super Kings (CSK). Everyone more or less contributed handsomely to the win and the highlight of their clinical victory were the outstanding performances from Sanju Samson (74) and Rahul Tewatia (3 wickets). It will be a battle of the equals and both of the teams will be eager to grab two more points under their belt in the tournament.

Punjab punching above their weight

KXIP will be oozing with confidence ahead of their encounter against the Royals in Sharjah. The Kings outclasses RCB in all the departments as they inflicted a 97-run defeat upon them. The highlight of that match was the sensational innings played by KL Rahul (132) and the bowling masterclass of the spin-wizards Ravi Bishnoi and Murugan Ashwin. The duo outfoxed the RCB batsmen, picking up 3 wickets each. With the match being played in Sharjah where the ground is extremely small, the two spinners will be on their toes as we have previously seen the CSK spinners being smashed all across the park ruthlessly by the RR batsmen. Meanwhile, the batting department of KXIP has been the biggest positive for them. Mayank Agarwal starred with the bat in the first game with a fluent 89 (60) and KL Rahul dominated in the second match with his unbelievable ton. A lot will be expected from the hard-hitting West Indian Nicholas Pooran who has not had the best of starts. A duck in the first game and a brisk 17 (18) in the second match, Pooran surely can perform better, based on the standards laid out by him in the past couple of years. Overall, the side looks extremely balanced for KXIP and they would be raring to square off against the Rajasthan Royals (RR) contingent.

RR no easy side, by any means

The biggest positive for Rajasthan Royals would be the blistering form of Sanju Samson. He ripped apart the bowling attack of CSK in the previous match with a blistering 72 (34) and was middling almost every single delivery. Captain Steve Smith who is one of the best batsmen of the current generation and is a part of the much famed Fab four (which comprises of Virat Kohli, Joe Root, Kane Williamson and Steve himself). Scoring 69 (47) in the previous match, Steve steadied RR’s ship after the early departure of opener Yashasvi Jaiswal and simultaneously kept the run-flow in check. RR’s Jofra Archer was absolutely sensational with the bat and with the ball. His short cameo of 27 (8) was destructive by all means and powered RR to 216/7. Rahul Tewatia was also tremendous with the ball, picking up 3 wickets. All-in-all, RR look composed and balanced as well.

Key players to watch out for

The skipper and swashbuckling opener of KXIP, KL Rahul was in majestic touch in the game against RCB and simply blew them away with his gigantic and monstrous sixes. An unbeaten knock of 132 off just 69 deliveries was a testament to KL Rahul's class and batting prowess. He will be a force to reckon with and RR will be quite vary about his performance. If they can put a screeching halt to KL Rahul's innings by picking up his wicket upfront, then 70% of the job is done for them.

There always has been a debate surrounding Sanju Samson's inclusion in the Indian T20 side. Now that Dhoni has retired from international cricket, this IPL will be a perfect platform for Sanju to rest his case to the national team selectors. So, Samson will be itching to make this IPL season, a memorable one for him. In the previous match of RR which was against CSK, Sanju was in breath-taking form. Sanju's fiery knock of 74 of 32 deliveries was laced with 9 sixes and 1 boundary, and his wicket will be the primary plan A for KXIP. His wicket early-on will be a priceless moment for KXIP and KL Rahul will have a tough time setting that up, considering Sanju's hot, blistering form.

Kings XI Punjab (KXIP) and Rajasthan Royals (RR) have locked horns against each other, a total of 19 times, with RR winning 10 matches and KXIP winning 9. Kings XI Punjab pocketed both the matches in 2019.

We had an exclusive conversation with M Mathan Kumar of Saranathan College of Engineering and VSP academy, Trichy and he opined the following about RR

The venue is Sharjah and compared to the other stadiums, it is not such a big stadium. Looking at Punjab's batting depth, it is better to chase for RR. So, toss plays a big role. But only team to successfully chase the target in this IPL is CSK. All other team who decided to chase ended up on the losing side. But seeing RR's perform against CSK in the same venue, they can chase upto 200 comfortably. Also, the addition of Buttler will give them a huge boost. Since it’s not a big stadium, restricting the opponent won’t be easy, but if they can, they should try to restrict before 200.If they happened to bat first, they need to give the same perform as in their previous match. No matter what the bowlers try it’s very difficult to contain in this ground since a miss hit can even clear the boundary. So, it’s necessary to put huge score on the board if they bat first. Since Buttler's addition, smith can come down the order and that will also increase their batting depth.

We had an exclusive conversation with Shantanu of V7Groupz cricket coaching centre and he had the following opinion of KXIP:

Since Sharjah is a smaller ground than the other grounds in UAE, the batsmen will go for the bigger shots. The main concept of the batsmen is to play all 20 overs with a minimum run-rate of 8. So, in the middle the big hitters (Maxwell, Pooran and Nair) will have no pressure and can do what they do easily. Bowling wise Shami and Cottrell should give a good start by scalping the wickets of Sanju Samson, Steve Smith and Yashasvi Jaiswal. Ravi Bishnoi will also need to produce some magical performances.

Who will emerge on top in a battle of equals?