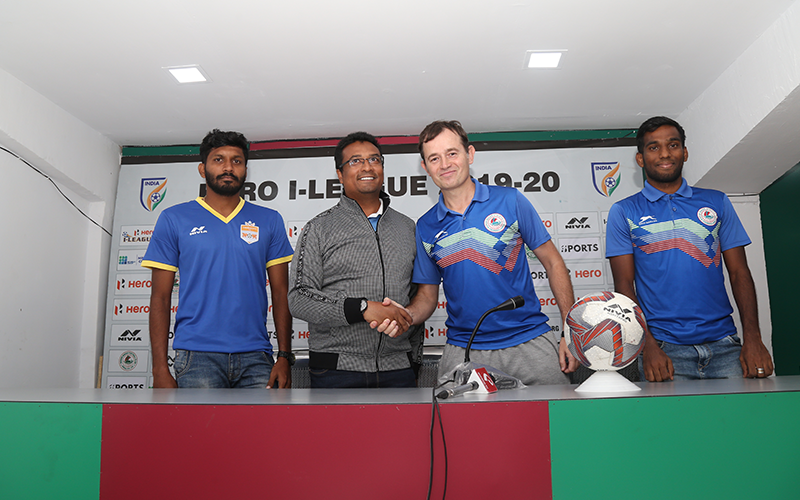 Runaway Hero I-League leaders Mohun Bagan will be welcoming defending champions Chennai City to the Kalyani Municipality Stadium on Thursday (March 05, 2020). The match is scheduled for a teatime kick-off at 5 pm and will be broadcast LIVE on 1Sports and the 1Sports official Facebook Page. Online streaming is also available on the Fancode app and website.

With six games to play and a 12-point lead at the summit of the Hero I-League table, it seems like only a matter of time before the Mariners are confirmed as the champions-elect.

The reverse fixture between the two sides in Coimbatore showcased a grandstand finish, with Chennai roaring back from three goals down (0-3) to pulling back two in a space of five minutes in the second half, making it 2-3 to set up a nervy finish.

Despite being in pole position, Mohun Bagan head coach Kibu Vicuna understandably asserted that the job isn’t done yet for his side. He said, “Our goal has been the same from the start, which is to win the league and we have to ensure that we do the job over the remainder of our games.”

The Akbar Nawas-coached side will have their work cut out against a team that has lost just once over the course of the season. Despite Chennai’s woes, it is difficult to question the quality they possess in every department – a dependable keeper in Nauzet Santana, an experienced centre-half in Roberto Eslava, a veteran midfielder in Katsumi Yusa, who is well familiar with the Green and Maroon half of Kolkata, and a skilful ‘Fito’ Miranda up front.

Coach Vicuna asserted the same and added, “Chennai are obviously a really good team. They troubled us in the reverse fixture in Coimbatore. They enjoy playing a possession-based game and when you look at their squad, you see quality. They have Nauzet Santana, who, in my opinion, is the best goalkeeper in the league. They have Roberto Eslava, Katsumi, Fito and few quality Indian players. It’s going to be challenging against them for sure.”

The visitors may be on course to surrendering their Champions' crown come the end of the season, but they still remain hopeful of finishing in the upper dominions of the league.

“It is always a special feeling to return to Mohun Bagan. I have so many good memories from my time here, but tomorrow, it’s about getting a result for Chennai because we are still fighting to finish as high as we can,” said Katsumi Yusa, Midfielder, Chennai City FC.

If Churchill lose to TRAU in Imphal today, only six more points (two wins) would be enough for Mohun Bagan to confirm the title. If that indeed turns out to be the case, a win against Chennai will get Bagan's job half done and subsequently, account for a poignant ‘passing of the torch’ moment.

What are the chances of 2020 Tokyo Olympics will be postpone?