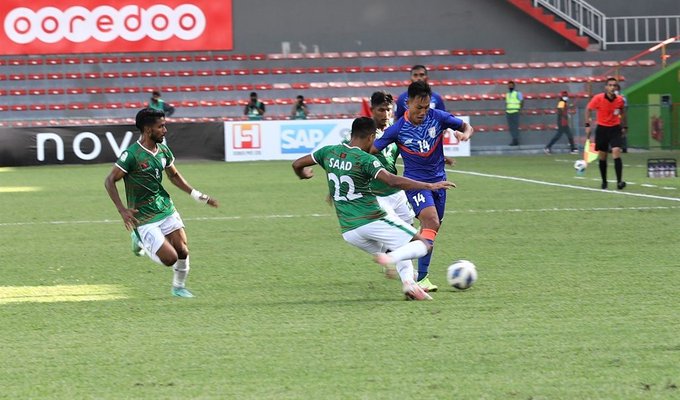 An opener by Sunil Chhetri was cancelled out by Yeasin Arafat as the rivals each claimed a point.

Ten-man Bangladesh came back from behind to steal a point against India, which turned out to be an exhilarating affair. The Blue Tigers took the lead around the half-hour mark through Sunil Chhetri, which was later canceled out by Yeasin Arafat of the Bengal Tigers.

This was Bangladesh’s second match in the 2021 edition of the SAFF Championship. They came into the game having defeated Sri Lanka 1-0 on Friday, 1st October. Topu Barman had scored the sole goal in that encounter.

It was an open match with both sides creating chances. India looked a bit off the pace in the first ten minutes, where a couple of loose first touches in the midfield area helped the Bengal Tigers pose danger to the Indian goal. The men in blue grew in composure as the game progressed.

India scored in the 26th minute when Udanta Singh sprinted down the right-hand flank under bright sun and pulled it back for Sunil Chhetri at the near post. The Indian Captain swung his boot at the ball, it hit the crossbar and went in. The noise inside the Maldives National Stadium gave way to silence, except for a very small section of Indian supporters who jumped with sheer joy.

Óscar Bruzón’s men continued to press the Indian midfield and create chances on the counter. The Indian wingers, Udanta and Liston Colaco kept switching flanks to keep the defenders under pressure.

Bangladesh’s best chance of the first half came in the 38th minute from a counter-attack on India’s corner at the other end. The pace of Bangladeshi players helped them create a 4v2 scenario. But lack of decisiveness hurt them as they missed a glorious opportunity.

The start of the second half was no different from the trend in the first half. Igor Stimac had made one change to his team. He subbed off Anirudh Thapa for Brandon Fernandes.

The Bengal Tigers created a clear-cut opportunity in the 52nd minute, down the right-hand side which was agonisingly missed by Rakib Hossain.

However, things changed in the 54th minute. Bangladesh’s defense line got caught by Manveer Singh’s header near the half-line, which resulted in free space for Liston Colaco to run into and be in a one-on-one situation with goalkeeper Rahman Zico. Bishwanath Ghosh, out of desperation, fouled Liston and received a red card for it.

Igor Stimac immediately brought in Apuia and Rahim Ali to add more midfield solidity and search for the second goal that would give them the cushion.

Interestingly, and surprisingly to some extent, the men in green didn’t set back. They constantly knocked at the door of Indian defense until they got through in the 74th minute.

Jamal Bhuyan went up to take the corner. The sun had almost set, but not on the fortunes of Bangladeshi players. He floated the ball in towards the near post. It was further flicked off to the far post, where Yeasin Arafat rose from the dusk set in Malé to bring back Bangladesh on level terms.

The Stadium went up in jubilation, and the players smiled and shouted as wide and hard as they could. From there on, both the teams kept taking a bite at each other, but none of them could create that one golden chance to win the game.

The referee blew his final whistle under the floodlights. Players shook each other’s hands, and Bangladeshi players ran to celebrate with their fans. The Bengal Tigers now sit at the top of the league with one win and one draw. Whereas India is currently third-placed with one point.

The Blue Tigers will now face Sri Lanka on Thursday, 7th October at 4:30 PM IST. While Bangladesh will play against the home side Maldives on the same day at 9.30 PM IST.