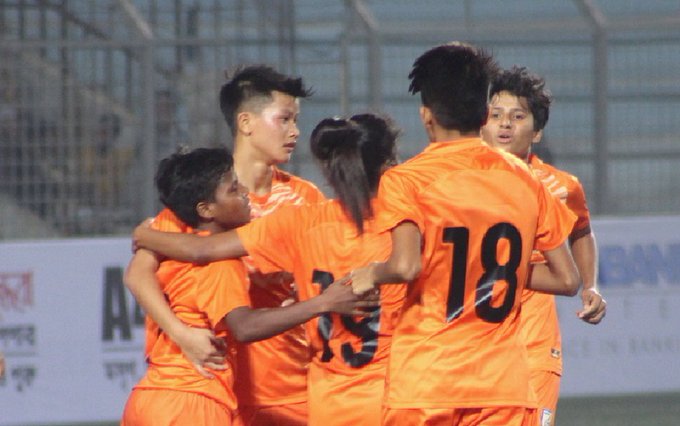 SAFF U-19 Women’s C’ship: Five-star performance for India as they sweep Sri Lanka aside

The India U-19 Women’s Team got off to a flying start in the SAFF U-19 Women’s Championship in Dhaka Bangladesh, defeating Sri Lanka by a massive 5-0 margin to lodge their first points of the tournament.

Nitu Linda scored two goals for the Alex Ambrose-coached outfit, while Santosh, Karen Estrocio, and Priyanka Devi netted one each to complete the rout for India.

India started off on the front foot right from the start, and got the lead in the second minute itself when Santosh put it in the net. The midfielder had gotten off a shot that was saved by Sri Lanka keeper TJN Dewage. However, Santosh managed to latch on to the rebound and smashed it into the net.

A five-star performance ⭐️ from India in their opening game of the SAFF U-19 Women's Championship in Dhaka, Bangladesh 🔥

Karen Estrocio doubled the lead three minutes later when she nodded the ball into an empty net after it came over the goalkeeper in her direction.

Karen and Anju NA combined well on the left flank to create another chance that was blocked. However, the stray balls kept falling at Indian feet before being blocked again and again before Nitu Linda finally jinked past her marker to slot it in.

With a three-goal lead, the Indian girls settled nicely into the match, keeping long bouts of possession and looking for opportunities to pry the Sri Lankan defence open.

Nitu and Karen came close on a couple of occasions but it was the former who got the fourth goal in the 41st minute after she produced a shot from outside the box that trickled into the bottom corner, past the keeper’s gloves.

India picked up from where they left off in the second half, and captain Shilky soon had a direct free kick thwarted by the keeper, before Karen's shot off the rebound was parried away.

Lynda Kom Serto came close to scoring the fifth goal for India in the 76th minute after a well-worked move that saw the midfielder’s shot bounce back off the post. Five minutes later, Nitu Linda was also denied by the woodwork when her header thudded off the inside of the post.

However, a minute later, substitute Priyanka Devi powered a shot from outside the box, to hand India the fifth and final goal.