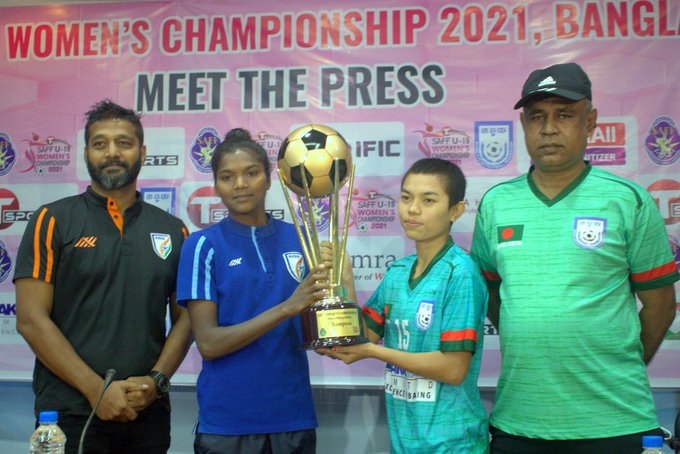 SAFF U-19 Women's C'ship: U19 girls stay determined ahead of the summit clash against hosts Bangladesh

After booking their spot in the final of the SAFF U-19 Women's Championship, Head Coach Alex Ambrose feels that his side will continue their winning attitude that they have been carrying on in this championship in the grand finale against hosts against Bangladesh on Wednesday (December 22, 2021).

“I am very happy that the girls are showing great focus and hunger. We played four games with the same energy and passion and the girls are ready with the same attitude. This is a platform for the players to develop themselves, and I am proud to say that they have done a great job”, he told www.the-aiff.com

India finished the group matches with nine points from four matches, while Bangladesh advanced to the finals of the championship with 10 points from three wins and one draw. The last time the two teams met, India had lost to the hosts by a solitary strike.

“The championship was such a great opportunity for the girls to play a good brand of football and they reflected that on the pitch. It always takes some time for the players to get to know each other’s games, so that helped us a lot in that regard”, he mentioned.

“We dominated every match we played in the SAFF Championship and created chances at will. All the matches were competitive, especially the one we played against Bangladesh. We lost the game but took a lot of learning from it which we have worked on,” he continued.

“We are expecting a tough game tomorrow, as Bangladesh will come hard at us. At the same time, we are looking to achieve our own targets for this championship.”

Alex is well aware of the fighting spirit his girls hold. “Bangladesh are a strong team. But we won’t stop fighting. Even if there is a five percent chance of winning, we will fight for it,” he expressed.

The kick-off tomorrow is slated for IST 5.30pm and the match will be streamed live on the T Sports official YouTube channel.

SAFF U-19 Women's C'ship: Valiant India fall at the last