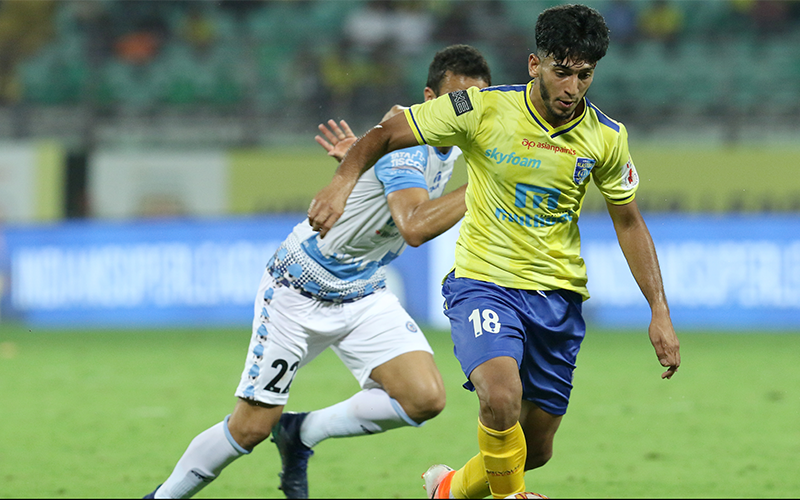 Kerala Blasters midfielder Sahal Abdul Samad has put pen to paper with a new contract, keeping him at the club until 2025.

The attacking midfielder born in Al-Ain, UAE, started playing football at the age of 8 at the Al Ethihad Sports Academy in Abu Dhabi. After moving to India he continued playing football at University level in Kannur. His performances earned him a spot in the U-21 Kerala team and further to the Santosh trophy team, where Sahal’s on field creativity and brilliance was spotted by a KBFC scout.

Upon signing his first professional contract he played for the reserve team in the 2017-18 I-league 2nd division with a few appearances off the bench for the senior team. The 2018-19 ISL season was a breakthrough for the young talent where he scored his first goal for the club against rivals Chennaiyin FC, apart from 2 assists in 37 ISL appearances. The fan favourite was also named the ISL Emerging Player of the Season and the AIFF Emerging Player of the Year. His excellent performances earned him a call up to the national team, first with the U-23 team in March and later made his senior National team debut in June in the 2019 King’s Cup match against Curaçao. With years of football left for the “Indian Ozil” as he’s passionately referred to by fans, Sahal is one of the rising stars from Kerala, one of the oldest powerhouses of Indian Football.

“Football has always been my biggest passion and commitment since childhood. From the very start of my professional career, I have really enjoyed adorning the KBFC crest and playing in front of the loudest fans. My journey with the sport has just begun and I hope to achieve greater feats for the club and for myself in the years to come. This is my state, my people and my home. I’m here to continue.”, says a proud and ambitious Sahal Abdul Samad on signing an extension with the club.

Karolis suggesting big things are on the horizon

“Sahal’s stay with the club is a re-affirmation of his commitment to the state of Kerala and a huge responsibility too. While we are extremely happy to have him as a part of the club for the next 5 years, I’m equally elated for our fans, who will get a chance to enjoy the game of our maestro in the upcoming seasons. This state has produced a number of football legends and we are committed to be the torchbearers in developing and nurturing young local talent, thereby reinforce the legacy of Kerala towards the sport”, said Karolis Skinkys, Sporting Director, Kerala Blasters FC, on Sahal’s contract extension.