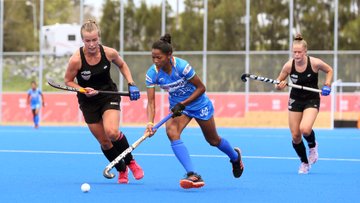 With just a month to go before the start of the FIH Hockey Women's Junior World Cup in South Africa 2021, there is a lot of excitement in the Indian camp says Salima Tete

Over the last three years, Salima Tete has proven her mettle to cement her place in the Senior Women's Team. Only 19-years-old, Salima was one of the youngest members of the Indian Women's Team that came up with a historic performance at the Tokyo Olympics 2020 where they narrowly lost the bronze medal to Great Britain.

"I have been really fortunate to get this kind of exposure with the Senior team, so early in my career. Playing under pressure and also understanding what it really takes to play at the highest level have been some of the key takeaways for me. I look forward to use this experience with the Senior team while working with my teammates from the Junior core group," stated Salima, who is now part of the Indian Junior Women's Core Probable's group for the FIH Hockey Women's Junior World Cup in South Africa starting 5th December, 2021.

The Indian Junior Women's team are grouped in Pool C along with Argentina, Japan and Russia. The other teams in the fray include Netherlands, Korea, Ireland, Zimbabwe in Pool A. England, Belgium, Canada and Uruguay in Pool B, and Germany, Spain, United States and South Africa in Pool D.

With just 1 month to go for the prestigious quadrennial event, Salima, who also led the Indian U-18 team to a Silver medal at the Youth Olympic Games in Buenos Aires in 2018, believes that the team is shaping up well. "The team has been preparing well. I have been part of this camp since September and I see a lot of improvement and there is a lot of excitement among the players. We get to play some internal matches with the Senior team which is great exposure for youngsters in this squad. The Indian Junior Team also did well when they travelled to Chile earlier this year for some test matches," she stated.

Salima further added "The team is extremely inspired by the Senior team and they all want to eventually play for the senior side and realise that the upcoming Junior World Cup is a perfect platform to showcase their talent. With the team yet to be announced, there is healthy competition within the group. These are indeed exciting times," Salima concluded.