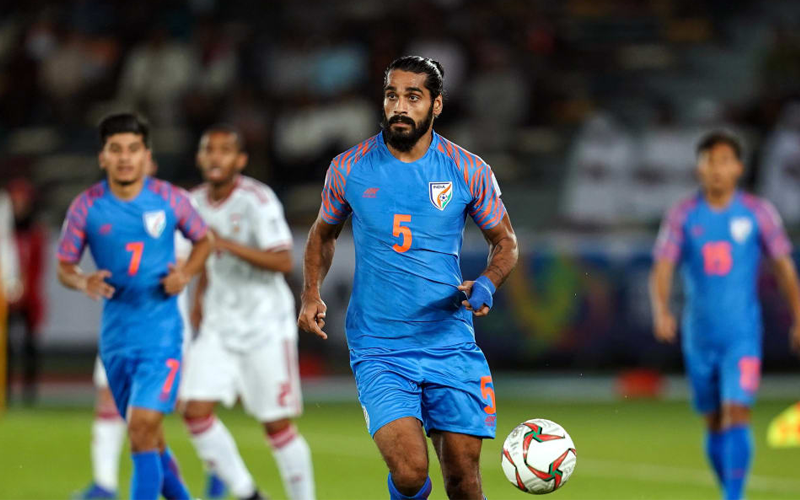 Sandesh Jhingan delivering inspiration on and off the field

A robust and powerful presence on the field, Sandesh Jhingan has become one of India’s most popular and passionate footballers.

Tough in the challenge and strong in the air, the centre-back was pivotal in India’s strong AFC Asian Cup campaign last year – just its second tournament appearance in 35 years. He has even captained India in the absence of iconic skipper Sunil Chhetri.

With distinctive long hair and beard, Jhingan cuts an imposing figure. But appearances, of course, can be misleading.

Away from the field, Jhingan’s studious and thoughtful manner diverges from his on-field persona. A poet and short story writer when times permits, he is also an avid historian and has considered views on social issues.

A serious knee injury last September meant an enforced absence from the game, but just like some other notable footballers during the COVID-19 lockdown, Jhingan has made the most of his downtime.

The Chandigarh-born 26-year-old worked furiously to return in time for India’s remaining FIFA World Cup Qatar 2022™ qualifiers, due to take place two months ago and now postponed for an indefinite period. But he also spent time pouring thoughts and emotions into writing.

“I always had love for the written word,” Jhingan told FIFA.com. “I would get goose bumps when I read a beautiful line from a book or a song. When I hang up the boots it is my dream to realise my book.”

For now though, the primary goal is helping Indian football progress. It is hard to imagine a more passionate individual for that cause.

“Other Asian kids want to play for Man United, Real Madrid, but as I kid I always dreamed of playing for India,” said Jhingan.

“I remember when I was 14, 15 watching the national team, and scrawling at school what formation we should play, and sharing ideas with my friends.

“On 12 March 2015, I made my debut for the national team and I finally got to sing the national anthem, and I have never sung it so loudly. I got a tattoo to mark the date. Even now, when I get a national team call-up, I make a small prayer. It is great to play for 1.3 billion people and do my best for them.”

Jhingan has more than played his role during his five years representing India. He featured prominently as India came within seconds of reaching the Asian Cup knockout stage for the first time since 1964, only to suffer injury-time heartbreak in their final group match.

Despite a strong draw away to continental champions Qatar, India’s campaign to reach the third round of 2022 World Cup qualifying is now all but mathematically over. But 2023 Asian Cup qualifying remains firmly in sight.

“It [last year’s Asian Cup] was a good learning experience,” said Jhingan. “You have to do your best and if it doesn’t go the way you wanted, you have to learn from it.

“Things have gone really well [in recent years]. We went four matches without conceding and we had a 13-match unbeaten run.

“We felt we could get the winner towards the end [against Qatar in World Cup qualifying], and that shows how much our mentality has improved as a national team.

“We have to have that dream to be in the World Cup, and it is a dream I also have. It is something I want to achieve like crazy before I hang up my boots. If I don’t achieve it as a player, I will do everything I can to help India qualify by coaching.

“But we have to understand we have to take steps towards it. The Asian Cup last year and all these things are stepping stones towards that bigger dream.”

Jhingan only took off one day during his entire six-month rehabilitation and that was over New Year due to travel. He is not only inspirational in his actions, but also through his words.

“When the injury happened, not for one second did I feel sorry for myself,” he said. “I took it as a challenge. It is part of the game, and some of the greats have had injuries like this.

“I learned a lot from this [absence]. I feel strong now. Whatever happens now, I feel confident I can deal with it.

“I don’t have to be mentally strong to get through an injury. There are people without houses, wondering where their next meal will come from, and there are people who are born disabled. I don’t know why we have to make injuries and these kinds of things so big.

“I have a family, I have a house. If I start worrying, it will be an injustice to the people who really have genuine hardship.”