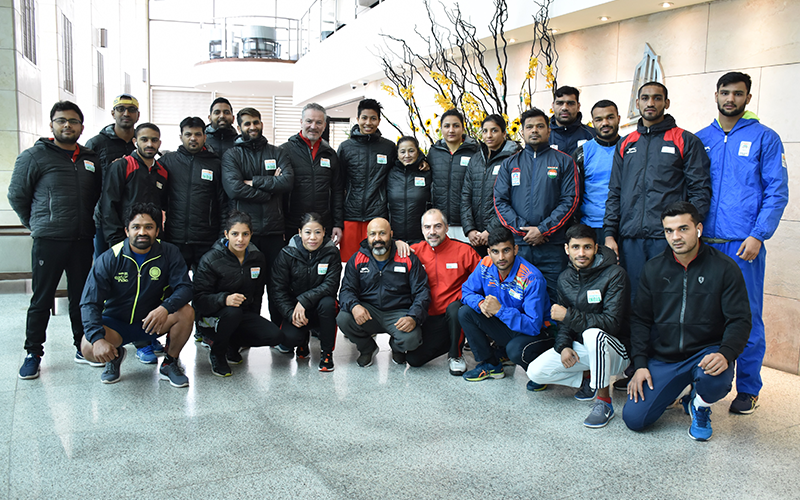 Two-time World Championships bronze medallist Lovlina Borgohain (69kg), Asian Championships gold medallist Pooja Rani (75kg) and Commonwealth Games silver medallist Satish Kumar (+91kg) are one win away from qualifying for the Tokyo Olympics as the draw for the Asian/Oceanian Olympic Qualifiers scheduled to be held in Amman, Jordan from March 3-11, was announced today. World Championships silver medallist Amit Panghal (52kg) and six-time world champion Mary Kom (51kg) will be able to make the trip to Tokyo if they win their first two bouts and reach the semis.

8 men and 5 women from the country need to reach the semi-finals as they remain in the hunt for a coveted Tokyo Olympic berth at this continental event, being conducted by the International Olympic Committee's (IOC) Boxing Task Force.

While Panghal is the top seed in his category, Satish Kumar has been seeded fourth in +91kg. Among the women, London Olympic bronze medallist Mary Kom is seeded second in 51kg which is headed by Chinese Taipei’s world champion Huang Hsiao-Wen. Lovlina Borgohain (69kg) and Pooja Rani (75kg) have been seeded second and fourth in their respective categories.

“Our boxers have trained well and they are well prepared. We are confident many of our boxers will be able to qualify,” said India’s High Performance Director, Santiago Nieva.

For the 2019 World Championships bronze medallist Mary Kom, her first big challenge will come in the form of third seed Tam Thi Nguyen of Vietnam, whom she can meet in the semi-finals. Nguyen won a bronze at the 2018 Asian Games and certainly has the experience of battling with the best.

“We have a good chance of securing multiple qualifications after a solid training session in Italy. Looking forward to the boxers giving their very best,” said Raffaele Bergamasco, the Performance Director of Indian women’s boxing.

A few months after claiming a historic silver medal at the World Championships, Panghal will be looking to bring that momentum as he sets his sights on fulfilling his Olympic dream. He starts off his campaign against the winner of the bout between Mongolia’s Enkhmanadakh Kharkhuu and Tajikistan’s Shuhrat Sabzaliev. Kazakhstan’s Saken Bibossinov, bronze medallist at the World Championships last year, is likely to be Panghal’s opponent in the semis with the second seed and reigning Olympic champion Shakhobidin Zoirov following in the final.

On Tuesday, Gaurav Solanki (57kg) and Ashish Kumar (75kg) will start their quest as they play their first-round bouts.