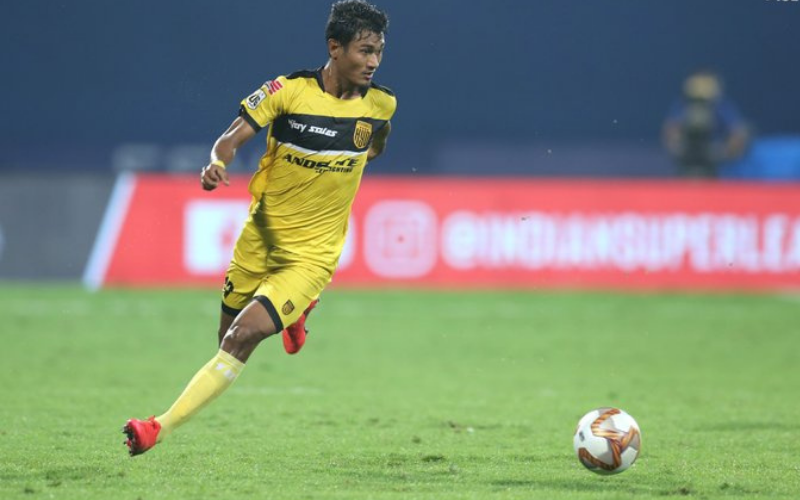 Second half madness gets Hyderabad back on track against hopeless Chennaiyin

Hyderabad FC gave their survival prospects a huge boost on Monday evening after staging a crazy second-half performance to ease to a 4-1 triumph over Chennaiyin FC at the GMC Stadium, Bambolim.

Joel Chianese (50'), Halicharan Narzary (53', 79') and Joao Victor (74') were on the scoresheet for Hyderabad while Anirudh Thapa (67') scored the only goal for Chennaiyin, who suffered their first-ever defeat against the Nizams.

The first half proved to be an entertaining, end-to-end contest with both goalkeepers finding themselves busy. Hyderabad created better chances but were guilty of missing them.

Chennaiyin goalkeeper Vishal Kaith was called into action early in the opening minute. Aridane Santana received a long ball and flicked it towards Chianese, who made a run in the box and fired a shot, but saw his effort blocked by Kaith.

Another chance went begging for the Nizams in the 10th minute as Chianese missed a gilt-edged opportunity through a free-kick. Narzary swung a cross towards the far post and Chianese missed an open header after Deepak Tangri failed to clear it away.

Chennaiyin also tested Hyderabad. They had the chance to draw first blood in the 31st minute but Laxmikant Kattimani made a fine save. Lallianzuala Chhangte made his way into the box from the left and cut inside, only to see his shot saved by Kattimani.

At the other end, Kaith produced an excellent save in the dying minutes of the first half to keep the scoreline goalless. After parrying away Asish Rai's cross, Kaith denied Chianese at point-blank range. The ball fell to Rai again, whose shot rattled the woodwork.

Hyderabad registered a three-minute double early on in the second half. A mix-up from Chennaiyin's backline gave them the opener. Kaith and Eli Sabia made a mess of a chipped pass from Santana, allowing Chianese to score his maiden Hero ISL goal.

Three minutes later, Hyderabad doubled their tally. They won a corner and did well to keep the ball in the box before Rahim Ali's clearance fell towards Nazary. The winger launched a cracking shot that struck the underside of the crossbar before heading into goal.

Chennaiyin reduced their deficit after a blunder from Kattimani who fluffed his lines while attempting to clear Ali's cross into the box, allowing Thapa an easy tap-in.

But Hyderabad soon restored their two-goal lead through Victor, who buried his shot into the top corner after receiving a pass from Rai.

Chennaiyin's defense was exposed again as they pushed for a late goal. Substitute Fran Sandaza released Narzary, who made his way from near the half-way line, into the box and produced a neat finish.