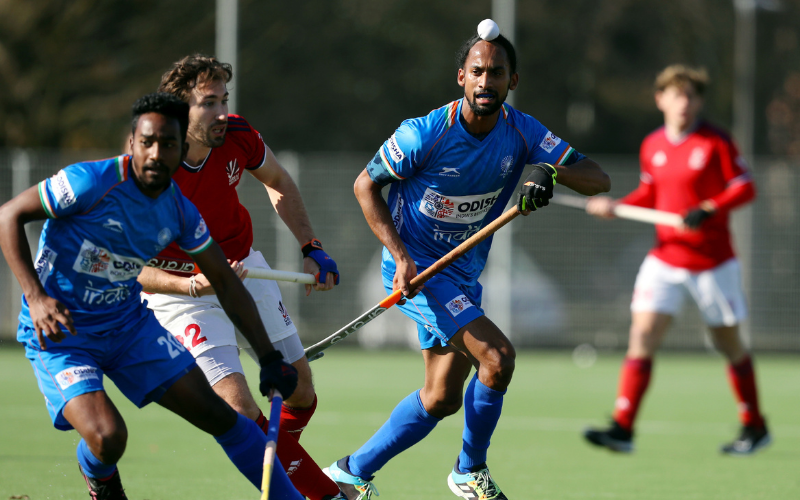 A resilient performance from the Indian Men's Hockey team against Great Britain in their third match of the Europe Tour saw them playout a 1-1 draw here in Antwerp on Saturday.

Striker Simranjeet Singh's late equaliser in the 57th minute ensured India remained unbeaten on the tour. For Great Britain, Alan Forsyth scored in the 2nd quarter.  Indian Men's team dominated with ball possession early in the match and used hard press to tame Great Britain's attack.  However, their first real opportunity came in the 10th minute when they earned themselves a PC but was denied by the goalkeeper PR Sreejesh who made an excellent save. Though both teams created a number of opportunities in the first quarter, neither could convert. Ending the first quarter in a 0-0 stalemate, the GB men started the second period aggressively and won themselves yet another PC, but the Indian custodian Krishan B Pathak, who replaced Sreejesh for the second quarter, made an outstanding save to deny Great Britain from drawing the first blood. In return, India did create potential opportunities in Great Britain's striking circle but couldn't convert. However, within a few minutes, Alan Forsyth's strike helped Great Britain to break the deadlock, making the scoreline 1-0 at the end of the second half.A dominating start to the third quarter saw GB earning back-to-back penalties, but India managed to nullify the threat. Vying for an equaliser, India penetrated twice inside Great Britain's striking circle, but couldn't make the most out of it.In their bid to score an equaliser, the World No. 4 went all out in the attack, penetrating as many as three times in the striking circle at the start of the final quarter but were denied each time. After being tested hard, Indian men got their rewards in the 57th minute as Simranjeet's goal denied Great Britain from posting a win. Indian Men's Team will play their fourth and final match of the Europe Tour as they take on Great Britain on Monday, 8th March 2021 at 1830 hrs IST.Please find attached images from the match between Indian Men's Team and Great Britain. Also, find attached the updated schedule.