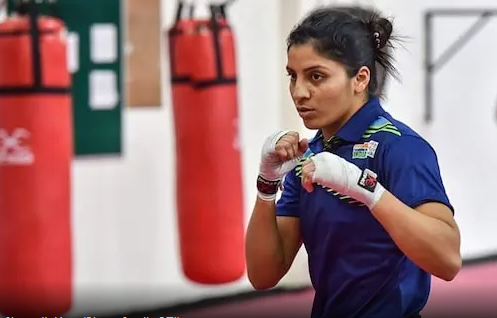 The 2018 World Championships bronze medallist Simranjit Kaur and reigning Asian champion Pooja Rani are among the top boxers to fight it out for the title as the 5th elite Women's National Boxing Championships begins at St Joseph's International School in Hisar, Haryana on Thursday.The prestigious tournament, which is being hosted in association with Haryana Boxing Sangh, will see participation of more than 320 boxers of 36 States/UTs/Boards from across the country.Apart from Punjab's Simranjit (60kg) and Pooja (81kg) of Haryana, the 2019 World Boxing Championships bronze medallist Jamuna Boro (54kg), defending champion Pwilao Basumatary (60kg) and Asian Championships bronze medallist Jaismine (60kg) will be seen presenting strong challenges. Reigning youth world champions Manipur's Babyrojisana Naorem (54kg), Sanamacha Thokchom (75kg) and Rajasthan's Arundhati Choudhary (70kg) will also be seen in action in the tournament, which will be played till October 27.

After resumption of the domestic circuit post Covid-19 pandemic, this is the six national championships the Boxing Federation of India (BFI) has been organising following successful executions of the junior, youth and men's national events.The opening ceremony will take place on Thursday which will be attended by Deputy Commissioner, Hisar Dr Priyanka Soni as chief guest alongside BFI General Secretary Hemanta Kumar Kalita and Treasurer Digvijay Singh.  The championships will be played as per the AIBA's 12 weight divisions—48kg, 50kg, 52kg, 54kg, 57kg, 60kg, 63kg, 66kg, 70kg, 75kg, 81kg and +81kg.The gold and silver medallists of the championships will earn themselves places in the national coaching camp. The remaining two names for the camp in each category will be selected on the basis of performances in selection trials, which will take place right after the nationals. In the trials, the bronze medallist winners will compete alongside the boxers representing the second team of top-3 teams of the last National Championships—Railway Sports Promotion Board (RSPB), Haryana and All India Police.In the last edition of the championships held in Kannur, Kerala in 2019, RSPB had clinched the team championship title with six gold medals while Haryana finished as the runners up.