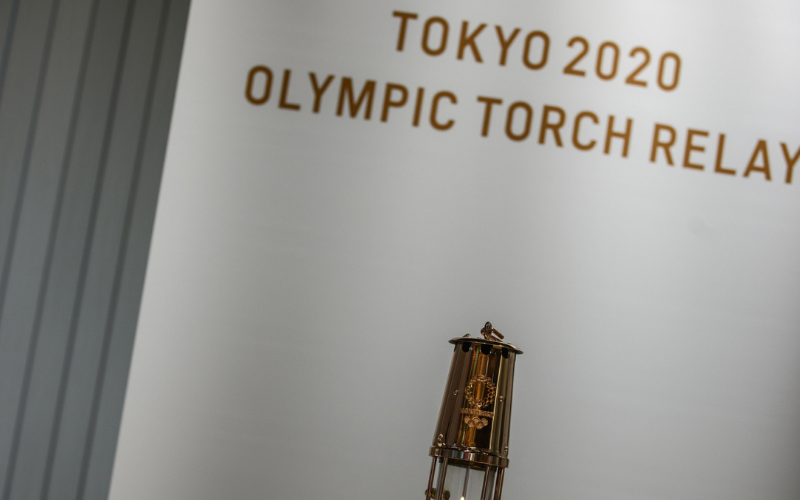 The Tokyo Skytree was lit up today in the Torch colours of sakura and gold to celebrate 100 days until the Olympic Flame begins its journey around Japan.

It came as officials announced that precautions against the spread of COVID-19 during the event will include social distancing for Relay runners and online streaming of the event to minimise crowds.

"For the Torchbearers, the officials working on the programme and the citizens in the local municipalities, we want to make sure that everyone's health is secure."

The Tokyo 2020 Olympics are now scheduled for July 23 to August 8 in 2021 after a postponement of a year due to the global health crisis.

Before the pandemic, Tokyo 2020 had released videos recommending that the runners embrace during the passing of the Flame, a sequence known as the "kiss", in order to symbolically express the "Hope Lights Our Way" motto of the Relay.

"Social distancing will be considered at the gathering spots and the Torch kiss scenes," Nunomura said today.

"We want to simplify the programme as much as possible and have been trying to minimise the number of vehicles and also the spectators.

"This Torch Relay will go all over Japan and there will be a lot of participants so we want to maximise our efforts to prevent the COVID-19 spread and take sufficient countermeasures."

The Torch Relay is also to be streamed online.

"We want the power of the Torch Relay to be exposed to as big an audience as possible," Nunomura said.

"We will be providing opportunities online across the world to follow the Torch Relay."

Some 10,000 people are expected to run during the domestic Relay which is scheduled to last for 121 days.

"We are in the final process of screening the Torchbearers," Nunomura said.

"In principle we would like the Torchbearers that were expected to run before the postponement to be able to run.

"We want each of the runners' health to be maintained, with their cooperation and that of the Tokyo 2020 officials.

"In the near future Tokyo 2020 will be sending out guidelines on countermeasures against COVID-19 to each of the municipalities.

"I hope that we can work in collaboration with the local municipalities as we take preventative measures.

"We want the runners to smile and we want the spectators watching to smile as they welcome the Relay and generate excitement and get the feeling that the Tokyo Olympics and Paralympics are coming."

Among those expected to participate is Yoshihiro Endo, a schoolteacher who also carried the Flame in 1964 when Tokyo last hosted the Games.

"Back then I had some understanding of the Torch Relay but I was still very much surprised how many people gathered to watch and still felt the weight of the Torch," he said.

"People asked me whether I had been invited to carry the Flame a second time.

"Amongst the enquiries were two people I had not spoken to for over 50 years.

"That really demonstrated how much attention this event has captured.

"The Torchbearers are people we can be proud of and my experience as a Torchbearer will always be a treasure for me."

The Relay is set to begin on March 25 at the J-Village in Fukushima, an area badly affected by the earthquake and tsunami in 2011.

"We were very disappointed that it was postponed but it was not something that we could do much about," said J-Village managing director Hisaya Tsurumoto.

"We have been able to start our preparations for next year's Relay.

"We hope our efforts to restore the prefecture will be broadcast to people watching."

The Flame is scheduled to arrive in Tokyo itself on July 9.

It is due to first appear in Setagaya ward before spending 15 days in the city, visiting through all 62 municipalities before reaching the Olympic Stadium for the Opening Ceremony.

Last year, the Olympic Flame was lit in Ancient Olympia in Greece.

It had made the journey to Japan before the Games were postponed.