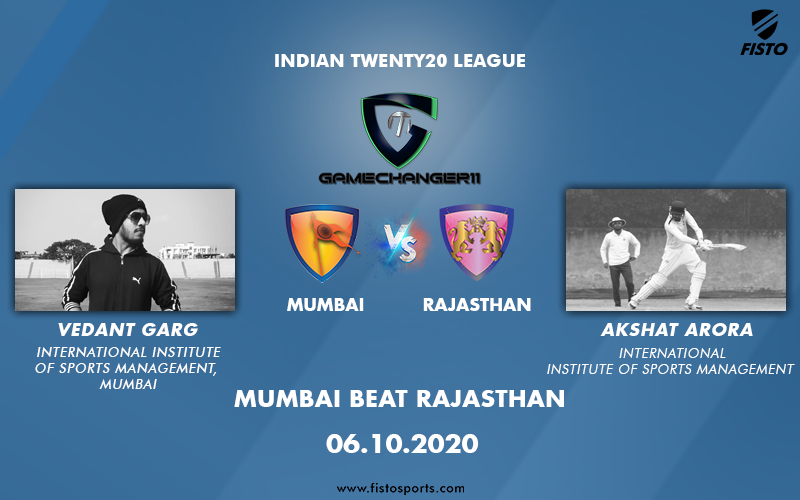 Mumbai Indians secured a deserved two points against a Steve Smith-led Rajasthan side that never really turned up on Tuesday night.

Mumbai Indians beat Rajasthan Royals convincingly by 57 runs to claim their third consecutive victories in the tournament. Contrarily, RR sustained their third straight defeats. With this win, both MI and DC will have 8 points apiece and they are retaining the top two spots of the table.

Today, the men-in-blue completely outsmarted the men-in-purple in all departments; batting, bowling, and fielding. Bumrah’s (4-0-20-4) and Suryakumar Yadav’s 79* played a match-winning role for MI in bowling and batting respectively.

Winning the toss, MI opted to bat first. They posted a huge total of 193 runs on the board. Suryakumar Yadav 79* was the lead scorer for his side. In reply, RR were bowled out for just 136. RR’s Jos Buttler (70) played a magnificent knock under pressure though for a losing cause. The rest of RR’s batsmen went out while attempting to hit big shots.

Mumbai Indians set their feet on the ground with an unchanged playing eleven. They didn’t want to disturb the winning combination. On RR’s part, there were a few changes; as expected Yashasvi Jaiswal was given a chance. Also, Kartik Tyagi and Ankit Rajpoot were selected for today’s playing XI.

MI put a convincing total of 193/4 runs in 20 overs. Quinton De Kock and Rohit Sharma once again shone with the bat adding 49 runs for the first wicket. However, MI lost their first wicket in the form of De Kock (23) off Kartik.

The Protea’s left-handed opener and Rohit Sharma had already done the initial damage smashing 50 runs in the first five over by then. MI Skipper 35 (23b, 4s x 2, 6s x 3) and Surya Kumar Yadav batted well adding a quick 39-run stand for the second wicket before Rohit Sharma got out. He was on his way for a big knock before Tewatia took an easy catch at long-on off Gopal.

Ishan Kishan (0) and Krunal Pandya (12) couldn’t take advantage of the situation and get out cheap scores. Now, MI were in deep trouble with 117/4 at 13.4 overs.

With only 38 balls to go and a meager 117 runs on the board, MI needed some big shots in the death overs. What followed next was Suryakuamar Yadav and Pandya’s carnage.

Only Shreyas Gopal (4-0-28-2) restrained MI’s onslaught to some extent in the slog overs with his sensible leg-break bowling.

Gopal’s two consecutive deliveries sent both Rohit and Ishan back to pavilion in his third over. It created a few tense moments in the MI dugout, but Yadav and Pandya handled the situation too well.

Before the match, we talked with Vedant Garg, International Institute of Sports Management; Mumbai. He predicted MI would continue with the same batting strategy that they followed against SRH, this held exactly true. MI tried to rotate the strike in the initial overs before Pandya and Yadav unleashed their batting prowess.

Vedant also opined that a decent total of 180-190 would be enough for the pace battery – Bumrah, Boult and Pattinson to defend. It’s turned out to be true as RR kept losing wickets at quick successions, and eventually lost the match with MI fast bowlers sharing 8 wickets among themselves.

Rajasthan Royals started their innings in a disastrous fashion as they lost Yashasvi Jaiswal (0) in the very second ball. Soon, they faced another big blow in the form of Steve Smith’s (6) dismissal in the next over. RR captain gave an inside edge off Bumrah to De Kock.

With 7/2, RR never looked out of trouble. They soon lost Sanju Samson as well for a duck in the third over. Thus, RR lost their top three batsmen in their first three overs respectively.

Now, only miracles could save Rajasthan Royals; unfortunately, it didn’t happen like that.

With a score of 42/4, the men-in-pink had the only hope left in the form of Jos Buttler who was single-handedly taking on MI bowlers without any support from the other end.

Jos Buttler and Jofra Archer for Rajasthan Royals in the IPL today:

The rest of RR's batsmen combined:

The England pair were on another level 👏 pic.twitter.com/qF6sIfqoU7

Eventually, he was dismissed at long-on courtesy Pollard’s excellent catch off Pattinson. With Buttler’s wicket, MI were inching closer to their imminent win. For RR, it was literally a final blow as they lost all their batsmen.

Still, the English wicketkeeper deserves a big round of applause as he defiantly hit MI bowlers down the ground for boundaries and sixes when RR’s much-decorated batting order was tumbling like a pack of cards from the other end.

Earlier, we discussed with Akshat Arora, IISM, Mumbai, and he stated that Lomror would play well today.

But, MI’s strict bowling dismissed Lomror for just 11. Also, as Akshat predicted that Smith would bat at Number three, it became true as RR skipper came out to bat at one down, but he was dismissed soon.

Similarly, even Samson was ineffective today and went back to the pavilion without making any impact on the game. Barring Buttler, the entire RR’s batting order flopped today one after another.

He yesterday opined that Yashasvi’s return would boost RR’s batting. But, Yashasvi was completely out of touch today – throwing his wicket away at the very second ball.

Overall, it was a good game, but MI really outclassed RR in every aspect of the game. They not only batted well even after losing top guns within 100 but also bowled well.

The way Pandya and Suryakumar Yadav accelerated MI’s batting in the last five overs is truly incredible and praiseworthy. Rajasthan Royals had no clue whatsoever to stop them.

In hindsight, it seems that if two-three RR batsmen had supported Jos Buttler with small-small partnerships, then this match would have been another super-over thriller. Alas, it didn’t happen like that!

Can MI go all the way to clinch 5th IPL title this season?