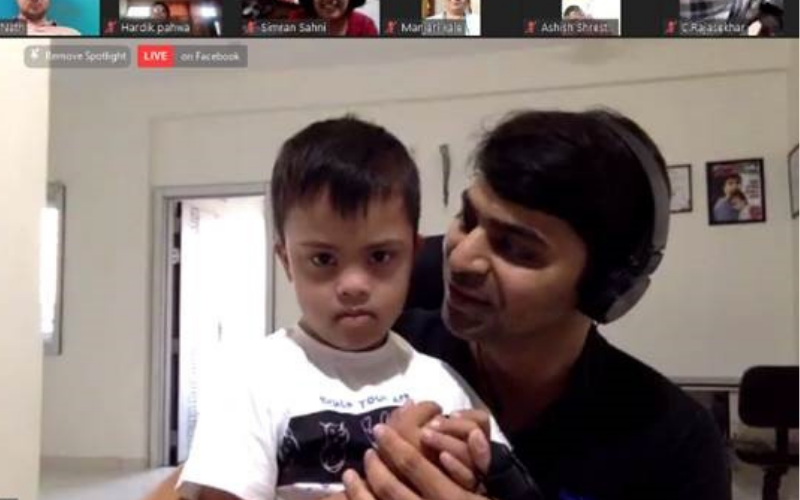 On the occasion of World Down Syndrome Day, over 150 participants joined a virtual event organized by Special Olympics, discussing and celebrating sporting experiences of the Athletes with Down Syndrome.

The event was viewed by over 120 parents who had assembled in Hyderabad as well. The session witnessed participation of many Athletes who have represented India at the Special Olympics World Games along with having earned accolades for their abilities such as swimming across the Bhagirathi river, appearing in films, and more. The Session also included Athletes from rural districts substantiating the continuation of the Special Olympics program in reaching the grassroots in this 'New Normal'.

Mr Aditya Tiwari, who is the youngest single parent to adopt a special needs child in India, holding a world record for the same, also joined the session. A software engineer by profession, he is a TEDx Speaker, Social Reformer, and Motivational Speaker working furiously towards spreading awareness about Persons with Down Syndrome.

Speaking at the session, Mr Aditya said "I was dissuaded to a large extent, to adopt a child with Down Syndrome. But my life changed with my son Avnish. I am very thankful to him for accepting me as a parent. He was the reason to change the adoption law in 2015. He has highlighted many issues to central government, PMO India through PIL, grievance, petition, letter to make the necessary changes in the laws that benefit to people with special needs that includes creating separate category Down syndrome in RPWD Act 2016, increase in monthly disability pension and enrolling every child who had special needs by birth for the disability pension instead waiting until age 6.

Acceptance is the first achievement we are struggling for, everything else comes later. We have many sports achievers in Special Olympics who have won medals at the World Games. We now, need to explore further options for them, with the help of the parents, professionals, NGOs and the Central/State Govts. All have to come together for their inclusion and to explore better opportunities for them"

Speaking about inclusion, Dr Amitav Mishra said, "Persons with Down Syndrome are very loveable, and this in itself improves their acceptability and in many instances popularity. Let us create an environment where they feel happy and emotionally safe. Inclusion starts from home. The immediate family must begin this process. They want to be part of every social opportunity. Let's join hands to take care of their socio-emotional learning, allowing them to work, to stay active and to feel included"