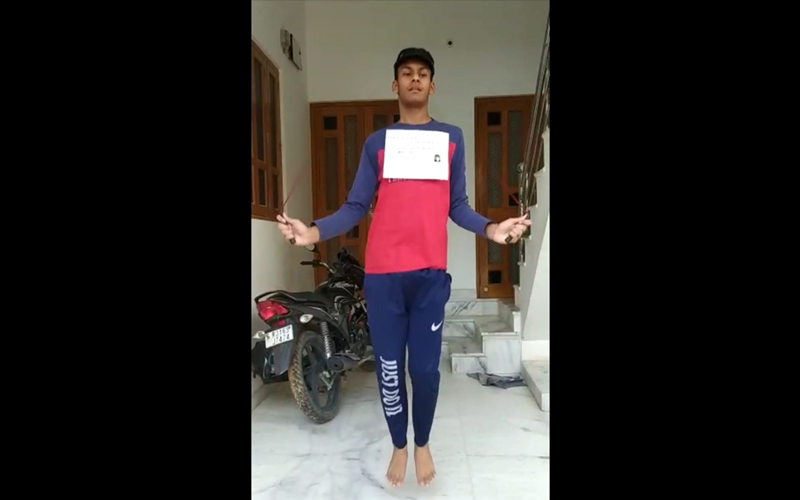 Fifty two participants across eight teams from the five states of Bihar, Chhattisgarh, Delhi, Uttar Pradesh (UP) and Rajasthan showcased their best performance.

Amitasha N. Mishra and Sahil Singh, the Unified Pair (a pair of youth with and without Intellectual Disability) of Uttar Pradesh led an unexplored module of a Skipping Competition on Saturday, 30th May in virtual space challenging the Athletes and their Unified Partners to face-off in a fairly new skill during the lockdown. Fifty two participants across eight teams from the five states of Bihar, Chhattisgarh, Delhi, Uttar Pradesh (UP) and Rajasthan showcased their best performance. The event was part of the SNF (Stavros Niarchos Foundation) supported program running across four states of India, namely, Uttar Pradesh, Uttrakhand, West Bengal and Haryana.

This event was organized by the SO Bharat- UP chapter garnering support from local partners as well- The Shriram Millenium School, Faridabad; Study Hall, Lucknow and Jeevandhara Rehabilitation Research Institute (Bareilly). The event amplified the message of Inclusion by combining Special Athletes with new Unified Partners, laying the foundation of new friendships. All participants were from diverse background whereas many were neo-digital users; however that did not stop them practicing together (digitally) participating in a competition which was completely backed by technology. Two weeks of selections, practices and final submissions culminated in a virtual felicitation ceremony conducted on Saturday with an overall attendance of approximately 200 people from India, Singapore, Pakistan and Indonesia. Heads of three National Institutes, working for persons with disabilities were also present, representing the Govt of India.

Dr Amitav Mishra , General Secretary SO Bharat and the Chairperson of the SO Bharat- UP Chapter said, “As our planned events of March and April could not happen due to lockdown; the youth leaders through a series of meetings and workshop came up with the concept of Virtual Unified Sports. We provided complete support to the unified leadership to carry out the experiment. It was too good to experiment the concept on 52 players in the presence of a large number of virtual viewers. The event not only engaged a large number of athletes in physical exercises, but also it connected with their peers without disabilities creating a large space in building an inclusive society.”

“Here in the Special Olympics movement, we believe in the strength of our athletes and young people to lead the charge for inclusion. During this global pandemic, Special Olympics unified pairs from across the Asia Pacific region have led by example and inspired the wider community with positive messages to stay fit, healthy, and socially connected while being isolated at home.

This project is a great example of how every one of us has the power to be an agent of change. We thank our partners, the Stavros Niarchos Foundation, for standing alongside us to empower young people as advocates for inclusion”, expressed Dipak Natali, President and Managing Director, Special Olympics Asia Pacific

With the support of SNF Special Olympics is transforming education systems around the world through Unified sports & Youth Engagement. Special Olympics created Unified Schools a model that builds Social Inclusion for students with and without Intellectual Disabilities through Inclusive Sport in Schools and Universities.